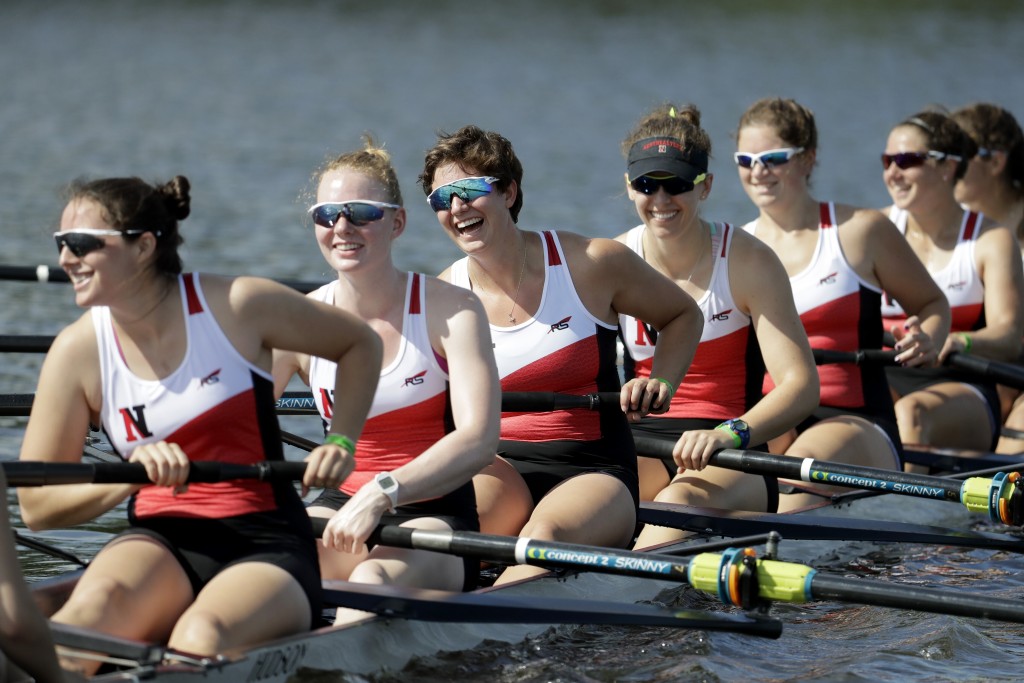 In 1974, colleges and universities in the United States began measuring the full effect of Title IX, the landmark 1972 law that required equal treatment for men and women in programs that received federal funding.

The domino effects were particularly felt in collegiate athletics, where men’s sport had long received the lion’s share of attention, funding, and support. There was marked resistance among athletic directors to tackling the issue of women’s sport, and The Associated Press put together a five-part series delving into the details.

Below is a story from this series as it appeared in the November 13, 1974 Press and Sun bulletin of Binghamton, New York.

EDITOR’S NOTE – It will come as no surprise that female athletes do not receive the same treatment as their male counterparts in the nation’s colleges. But they might soon because a law called Title IX says universities must provide equal athletic opportunities for both sexes. Here’s an account of what it was like to be an athlete before Title IX.

The typical athletic director in the typical college athletic department isn’t a misogynist. On his desk, next to all the trophies, is a family portrait showing his wife and maybe a daughter or two.

Standing outside his carpeted office is another smiling woman, pouring him coffee, opening his mail, and typing his letters. He will say that he is everything for women.

But in many cases, his sporting budget won’t reflect that.

“I don’t understand what’s going on in the heads of these athletic directors,” said Dan Bakinowski, who volunteered to coach the Boston University women’s team to two national championships last summer. “They have a feeling that the sportswomen are going to walk away. If you think that, you are just fooling yourself.”

“Women’s athletics is not a fad. There are just too many of them out there. You have so much enthusiasm and it won’t stop. The ADs had better get smarter.”

And if colleges are to continue receiving their federal checks for assistance in various areas, some athletic departments will have to change their focus because the long arm of the law is on its way to helping women’s sports.

With Title IX of the Education Act of 1972 outlawing discrimination in all college programs and nearing full enforcement, opportunities are opening up for women’s athletics at many colleges, as Anne Findlay Chamberlain, a first-year fellow at Penn State, commented caused to say:

“We used to have to wear skirts and stockings to a game. But that whole era has changed now and we don’t have to be ashamed of being female athletes, even though I never was.”

The past is not so encouraging for women. Back then were the dark days of women’s sports—an era that still exists on some campuses today—when the men had all the pie and the women were lucky if they got a few crumbs.

“We practiced at 6 a.m. so we wouldn’t get in the way of the men’s team, and also because our volunteer coach (Bakinowski) worked 9-5,” recalls team member Betsy Hochberg.

“In order to compete,” says Hochberg, “we had to borrow boats from other schools. We collected donations with cake sales, raffles and car washes. We even resorted to a rowing marathon. We set up a swimming pool in front of the Studentenwerk and rowed 24 hours a day in two-hour shifts for a week. People came by and threw loose change into the pool.

“It was like begging. But the money had to be raised somehow. BU didn’t want to give it to us… Crew is demanding enough in the best conditions, but practicing with flashlights at 6 in the morning when ice is forming on the oarlocks and you can’t see a meter ahead you, well, it’s almost unbearable.”

Nearly. With all these problems, the team still managed to qualify for the national championships in Oakland, California, which created a new set of problems – transportation and housing for them and their boats.

They borrowed a boat from Radcliffe and ironically beat Radcliffe in the final. They paid their own way to California, at a cost of $1,000 per woman. And they rented the boat trailer, owned by the BU men’s crew, for five cents a mile, which cost about $300 for the 6,000-mile round trip.

“If we had been men,” says Hochberg, “the athletic department couldn’t have done enough for us.”

Many athletic departments have recognized the existence of women, and of course athletics, but not both together.

Most schools have operated women’s athletics “with a different philosophy than men’s programs,” says John E. Shay, vice president of student affairs at the University of Rhode Island.

“Men’s sports have full-time coaches in most major sports, or are exempt from regular teaching commitments to do coaching,” says Shay. “Women coached the women’s sport in addition to their other duties on campus as an overload.”

Title IX is ultimately intended to create an identical sports philosophy for both genders, but it won’t erase the bad memories.

“A women’s track and field team in Illinois scheduled a meeting a year in advance and invited colleges from around the area. The week before the meet, the men’s running coach called and said he was sorry, but the boys wanted some more exercise on the day of the meet. The meeting has been cancelled.”

A businessman whose daughter competes on the Maryland basketball, volleyball and track teams has filed a Title IX complaint against the school. Carl Croydor says the school’s men’s basketball team flew to the University of Virginia — a three-hour bus ride. But “at the height of the energy crisis last December, the university had the women’s basketball team drive itself to Rochester — an eight-hour drive — to compete in the Eastern Regionals.

“The girls didn’t know if they would find enough gas to come back,” Croydor said.

Bakinowski says he stopped getting up at 5:30 a.m. to coach the BU crew because “the university didn’t do anything for us … the athletic department just has a bunch of skewed values.” They just don’t see the injustice when men have to ride for free and women have to go out and sell coffee.”