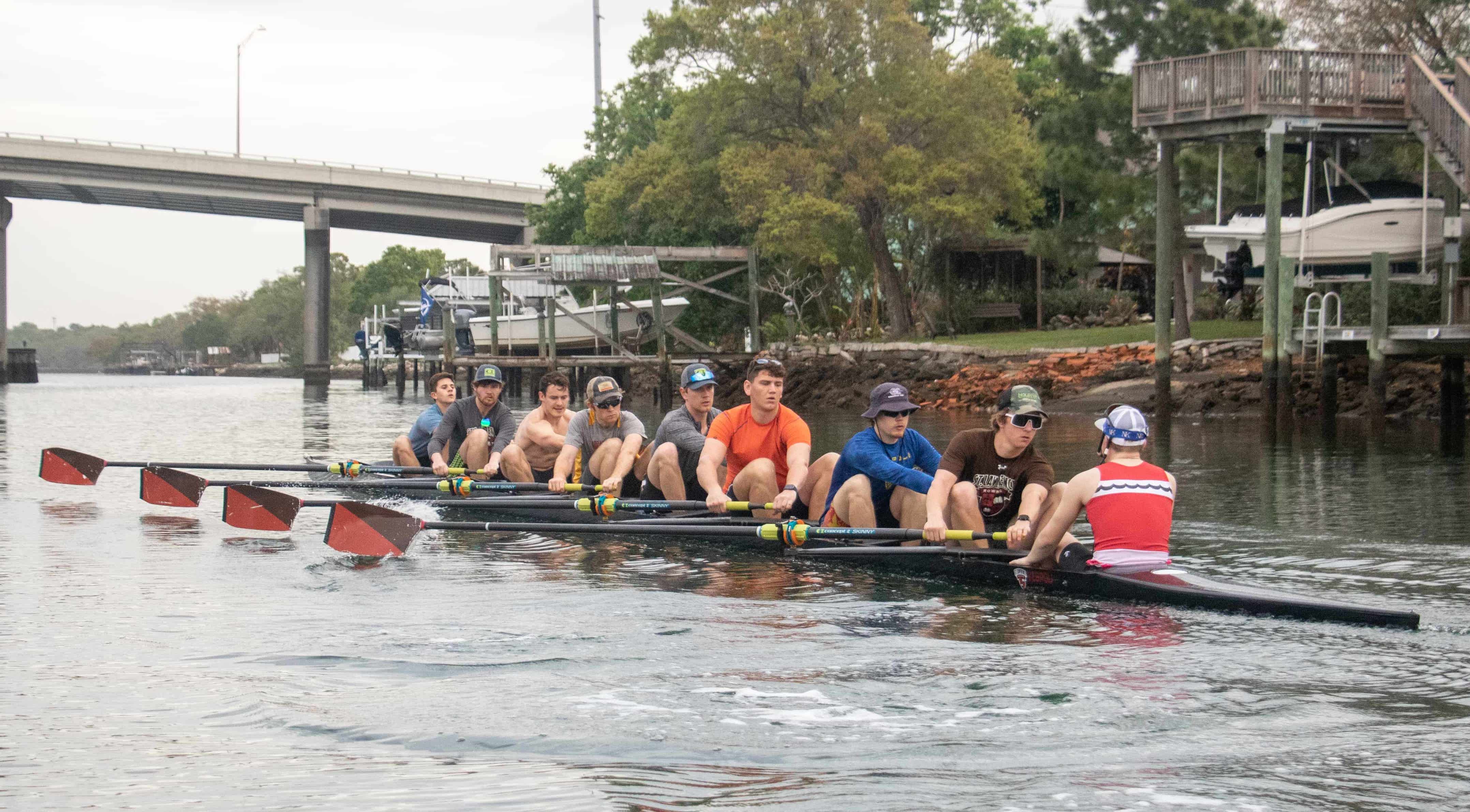 Blood, Sweat and Oar: The camaraderie in hard work

Being a member of the St. Lawrence rowing team is a formidable physical and mental challenge, but the Saints’ collective willpower on and off the water inspires a spirit of camaraderie like no other.

In his 17thth Season as head coach of the men’s rowing team, George Repicky speaks both bluntly and proudly about his sport. He is no slouch and knows about the grueling tasks that await him and his squad this spring. He welcomes the challenge.

To prepare for the difficult season, Repicky and his team travel to Tampa, Florida for spring break. Repicky will drive the entire 20.5-hour trip, towing the team’s boats in a trailer.

However, the Saints will not be traveling to Florida to participate in the stereotypical activities associated with a college spring break. There is work to be done.

“It’s all on the water,” Repicky said. “We plan to row twice a day, every day. We usually leave the hotel between 6:45am and 7:00am. We depart to Tampa Bay from approximately 7:00 a.m. to 10:00 a.m. Then the athletes go to lunch and usually go back to their rooms and take a nap. Then we go out again in the afternoon for three hours, depending on the weather and schedule.

“It’s not a fun spring break,” Repicky explained. “It’s fun because you’re fit, you get on the boats, it’s sunny and it’s a cool experience to do that.”

While Repicky might not describe the journey as particularly “fun,” his athletes are ready for the adventure and looking forward to putting in the work necessary.

“Tampa is really going to help us get settled,” said helmsman David Osborne of ’22.

David is one of only four team members who were on the list for the St. Lawrence Rowing Program‘s last trip three years ago. Alongside him were Nicholas Nigro ’22, James Rauch ’22 and Matthew Shadick ’22. Angus McAndrew ’22, who joined the program last spring, is the team’s only other senior. He also has a good feeling about going south for the week.

“Neither of us had been in the boat since our last training session, which would be back in early November. Given the circumstances, we did well [in winter training] and morale is pretty high going into this spring trip.”

Much like their head coach, Angus and David are sober about the challenges ahead and their leadership responsibilities as seniors.

“Every day you show up for practice, you show up for something to endure,” Angus said. “You will suffer a little every day if you do it right. That alone brings us together.”

“I think when we go through the grind together, we have to find the right mindset,” he said. “It’s work, but we’ll do it together.”

“Our long-term goal is a Liberty Leagues medal,” said Angus. “I don’t think that’s been done in St. Lawrence for over a decade.”

David is also aware of the history of the program and looks forward to chasing a Liberty League medal.

“That has been the aim of the program since we last did it in 2009. I think Tampa will allow us to take that first step in the right direction.”

It’s an impressive goal and the confidence with which the team speaks about it is equally impressive. What is most impressive, however, is another long-term goal that the seniors want to achieve.

“We want to leave the program better than we found it, so the next generation can move on and build on what we did,” said David. “It’s very important to us to set the bar high before we go.”

“It’s about the culture that we create as an upper class in the team and how we behave. We’re a good program and we really care about our integrity,” Angus said. “Whether in training or on the water, we want to show that.”

This goal reflects a sense of pride that is common among athletes and staff in the rowing program.

“The turnover rate is pretty high,” McAndrew said. “A lot of people drop out. As seniors who’ve reached this point, we feel we really need to reassure the underclassmen that it’s worth it. What you get out of it is well worth the suffering and time invested.”

“Some of the best people who call themselves Laurentians do so because of the unique challenges that it presents,” Repicky said. “We work hard and feel committed to one another. The training is tough and we are better people because we did this.”