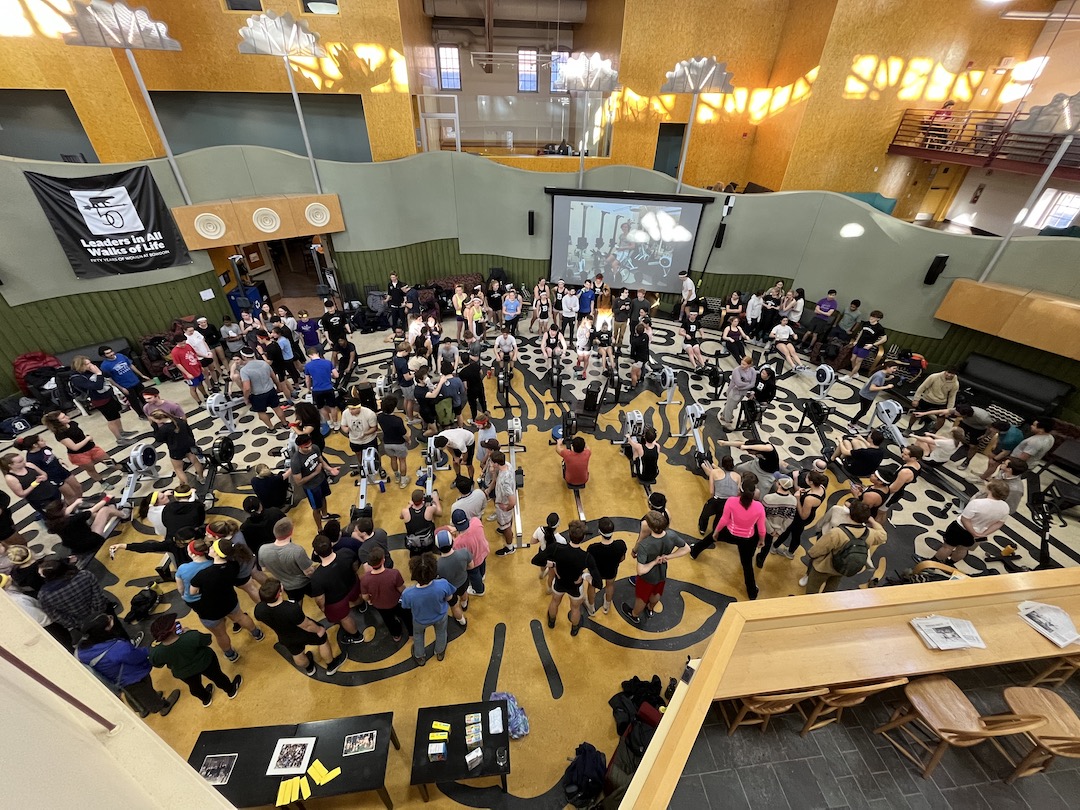 Zietlow died in a car accident in December 2018 during the winter break of his freshman year at Bowdoin. He would have graduated from Bowdoin this spring.

“Henry was one of those guys that stood out from the start,” said head coach Doug Welling.

Despite only having one semester and one crew season with the Bowdoin community, Zietlow left a lasting impression on everyone his life touched.

“He was only here for a pretty short time, but he had a very big impact on our team and on me personally,” said Ben Ross ’22.

Although this was the third annual Ergathon, the event looked much like last Friday for the second time. The event was much smaller last spring due to the ongoing pandemic and took place outside on the quad. This year, however, the Crew team, along with colleagues and members of Bowdoin Athletics, once again packed the Morrell Lounge with energetic enthusiasm.

“The thought of Henry evokes a lot of extreme sadness and his loss, but at the same time just a tremendous amount of joy and ultimate positivity. And we really wanted to [this] to celebrate his life,” Welling said.

Despite the upcoming graduation of the last class of students who knew Zietlow personally, assistant coach Ry Hills is certain his legacy will live on.

“This year’s first-year team walked away from the Ergathon with an extra dose of panache and enthusiasm and a huge Henry-like smile. And that’s the part of Henry that this event can pass on…it’s simple, it’s contagious. That spirit is contagious,” Hills said.

Nick Werner attended the Ergathon for the first time in 24 and is already looking forward to the next time.

The organizers of the event invite everyone to take part in the celebration. Welling explained that Ergen works so well because anyone, including non-rowers, can learn it quickly. Ross agrees and hopes people will go in the future, even if they didn’t go this year.

“I would say go next year. If you’re scared, don’t be scared – it’s more of a dance party than emergence. It’s a really cool way to get together with everyone. Encourage people to leave. It’s so much fun trying new things and meeting new people,” Ross said.

Zietlow’s legacy and the joy of his memorial service have begun to spread even beyond Bowdoin. Last Friday, as Bowdoin students competed in their ergathon, rowers on Ithaca College’s men’s team rowed the same marathon to honor Zietlow. The Ithaca team learned about this from a sibling at Bowdoin College.

In addition to the annual Ergathon men’s team, Zietlows have initials on their uniforms, a boat donated and named in his honor, and sweatbands that include his silhouette and nickname: “Freespeed.”