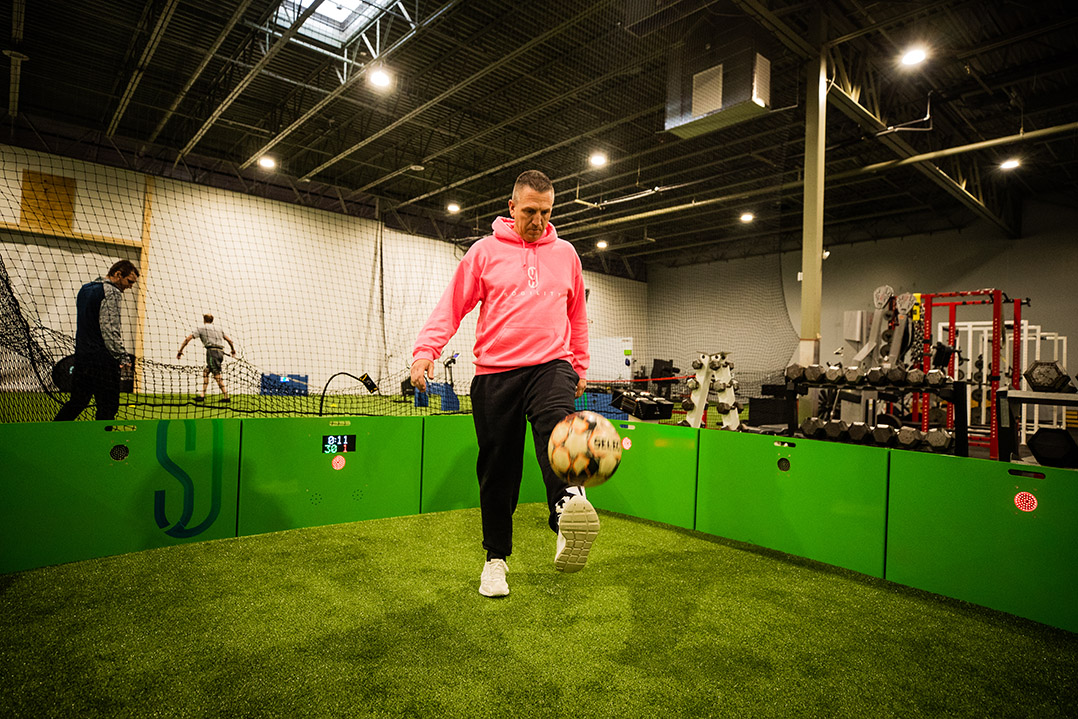 Jimmy Carson has a passion for football, one shared by his late business partner Chris McGrath.

“We were planning and setting everything up and doing whatever we had to do to open up in Fishers, and Chris got sick,” Carson said. “I’ve embarked on making it happen and thinking about all the things it could be.”

McGrath, a Noblesville resident who was the boys’ soccer coach at Guerin Catholic High School, died on November 17, 2021 after approximately 45 days on a ventilator.

“From that moment on I said we were just going to try and live Chris’ vision and give as many kids as possible the chance to promote the game,” Carson said. “Of course it’s a good thing to develop technically and to be better at football. But I think we do more than that. I think we help build trust. We see them grow and mature.

“It’s great to see them carry themselves through the door after a few months of training. You feel empowered.”

The name Sogility derives from a combination of football and agility.

“The root of everything we do is based on football,” said Carson. “We have other athletes who benefit from sport development, but our main goal is to work with football athletes.”

McGrath founded Sogility in early 2019, and then Carson joined that summer. He began working with McGrath on the Sogility concept after the facility opened. Carson said McGrath, a corporate attorney, has more experience on the business side, while his experience was in training and coaching.

“I had this football itch and wanted to do it full-time and pursue my true passion,” said Carson, who lives in Westfield, near Sogility. “My family helped set up a few leagues when my grandfather moved to this country from Scotland in 1967. 54 years later, I’m still trying to improve the game and help players get better.”

Carson, 41, said he is proud of what the company has developed in terms of what it offers to young players and even professional players who train at the facility during the off-season.

“Our goal is to inspire a love of football and give kids a football community to call home, play and get their extra practice from,” said Carson. “The world has changed a lot over time. Kids can’t just be kids and go to the park to play alone. Having a football community where they feel safe and where parents feel their kids have a place to play is what we’re all about.”

Carson said he wants to expand into other communities to provide more player development opportunities.

“We use technology as a tool for player development, so we find some of the best equipment around the world,” said Carson. “We bring that here so that a player can use the same kit that (Lionel) Messi used at Barcelona. We all know that technology is such a big part of kids’ lives these days. They probably won’t go into the backyard and just work on their skills, kicking balls off the fence. So now we have technology as a tool to get their attention and their desire and passion for change.”

“I grew up right across from the Fishers facility, so coming home was kind of cool,” Carson said. “There are a lot of kids that I went to high school with who have kids who train, and I coach their kids. It kind of comes full circle.”

Jimmy Carson said that through trial and error, Sogility has found the types of technology that work best for soccer training.

“We feel like we’ve hit the sweet spot and offer six different types of training for players,” said Carson. “It’s quite unique, and what parents enjoy is not having to go to six different places.”

Carson said Sogility is working with iFast, which stands for Indianapolis Fitness and Sports Training, to help with the development.

Techtouch, a 1-on-1 training session with a certified sogility trainer, is also offered. The sessions focus on the first targeted touch, turning, combination play, receiving the ball from the air and accurate passing.

There are member skills classes for small groups and one-on-one sessions that focus on attacking skills. TOCA, a training method to improve ball feeling, means playing fast in Spanish football.

“The (ITSZ ICONO) rings help me check my shoulders and the TOCAs (Techtouch training equipment) are good because you can work on your touch and control,” said Garet McCoy, a 12-year-old Camel soccer player . “I really like iFast because you can train your legs, core and everything else to be stronger on the field.”