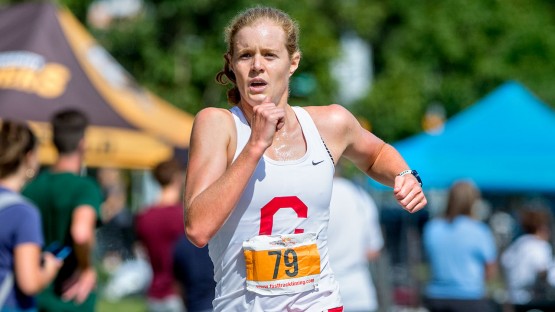 On June 23, 1972, President Richard M. Nixon signed Title IX, a portion of the Educational Amendment to the US Constitution that prohibited gender discrimination in schools or other federally funded educational programs.

One of the most notable effects was athletics: women’s participation in the sport grew exponentially, including at Cornell, where by the fall of 1972 more than 300 women were involved in a dozen college sports – more than any other college or university in New York state .

But the passage of Title IX was far from the start of women’s athletics on East Hill. From two-time national fencing champion Elizabeth Ross, class of 1930, to medalist in the Olympic and World Triathlon series Taylor Knibb ’20, Women have a long history of athletic achievement at Cornell.

This story comes from the book “Silver Era, Golden Moments: A Celebration of Ivy League Women’s Athletics,” written by Paula D. Welch, historian and professor emeritus at the University of Florida, on the occasion of the 25th anniversary of Title IX. was written in 1997:

As a long-standing co-educational institution, Cornell has a long history of women’s athletics, although prior to the 1970s, sport was practiced primarily as an extension of physical education.

Women in Cornell were involved in basketball and rowing as early as 1897, with cross-class competitions being held in these sports around 1900; the addition of rowing also brought the arrival of Ellen Canfield, Cornell’s first female PE teacher. Field hockey was added soon after the turn of the century, and fencing was also offered early in the development of the women’s athletics program.

In 1930, the fencing team won the National Intercollegiate Women’s Fencing Association championship by beating the defending champions at New York University. Cornell’s Elizabeth Ross won the individual fencing title in 1930 and ’31, as did Grace Acel in 1942 and ’43.

Cornell’s rifle and archer teams held telegraphic competitions in the 1930s – the teams competed in their own institutions and compared results by telegraph – and cross-class sporting events, in-house competitions between dorms, and game and sports days were also popular. Dorothy Bateman was director of women’s sports from her arrival in 1920 until her retirement, and was replaced by Martha Arnett in 1960.

In the early 1970s, Helen Newman Hall, originally used for recreational and educational activities, was converted into a multi-purpose facility for collegiate women’s sports. And by the fall of 1972, more than 300 women represented Cornell in a dozen college sports – more than any other college or university in New York state.

With the growing interest in women’s athletics in the 1970s, Arnett identified the lack of qualified women’s coaches and insufficient budgets as major obstacles to the further development of the program. The $ 19,000 allocated to women’s athletics came from the women’s physical education budget, while the men’s sports program had an independent budget of $ 500,000.

Throughout the 1970s, Arnett continued to push for more support for women’s athletics, emphasizing the increased amount of time teacher-coaches required as the number of students, the level of competition, and the frequency of travel increased. Eventually the university allocated $ 5,000 to new programs for the 1976-77 academic year and approved the recruitment of a coach to work with female athletes.

But even that was not enough to get Cornell where Arnett was supposed to see the program to compete with his peers, nor was it enough to fill the new Title IX mandates. In her 1976-77 annual report, Arnett cited still unmet requirements in coaching, facilities, travel and equipment money, sports information, and fundraising. Arnett summed up her ongoing frustration: “Cornell had one of the best exercise programs for women in the country a few years ago, but we’re falling further and further behind New York and Ivy Schools.”

Despite the challenges of the decade, Cornell athletes have seen success at the national, league, national and even international levels. For example, the undefeated 1974 tennis team led by Helen Johnson, Sarah Reynolds and Karen Krinsky won the New York State Fall Championship. Cornell ice hockey teams dominated the Ivy League in the 1970s, winning the first Ivy title in 1976 and five other titles from 1977 to 1981. The 1978 gymnasts, including five freshmen, won the Ivy League championship and finished second in the New York State AIAW meet.

At the national level, Cornell continued his dominance in fencing, winning consecutive titles at the NIWFA championships in 1972 and 1973. And swimmer Hilary Walsh competed in international competitions in March 1975 when she was at an official meeting between the United States and the Soviet Union in Leningrad won the 200-meter individual medley, second in the 400-meter individual medley and third in the 200-meter butterfly event.

Teams in multiple sports have had significant achievements at the school, league, and national levels.

The decade began with a fifth straight Ivy League title in ice hockey in 1980 and a share of the 1981 title. At one point during the 1981 season the team finished third in the country. The gymnastics team also reached the top of Ivy League competitions, winning the championship in 1982, ’85 and ’88.

In 1984 the tennis team won their first tournament with the New York State Championship in the fall and continued their first undefeated fall season, with Jana Klein and Linda Monastyer unbeaten in the individual competition.

Two years later, the cross-country team won more dual meetings than any other team in the history of the program. Finally, towards the end of the decade, the crew ended their 1989 season by winning their first National Collegiate Women’s Rowing Championship at the Lake Wingra Regatta at the University of Wisconsin, Madison. The rower Stephanie Maxwell, a member of the championship team, had also participated in the 1988 Olympic Games in Seoul.

Cornell raised his football program to college status in 1982 under head coach Randy May. Three-time All-American Laurie Collier led the soccer team to an overall record of 35-14-8 and a share of the 1987 Ivy title in her three-year career. Collier was named Player of the Year in 1986 and was an All- First-team ivy pick plus an all-northeast pick. She set Cornell’s season and career records for goals, assists and points, and established school and Ivy single-game scores for points and goals.

The 1990s brought Cornell’s sportswomen new success with the elevation of softball to college status and the first Ivy League titles in sports such as field hockey, soccer, softball and volleyball. During the second half of the decade, several notable gifts to the program enabled the construction of important new facilities, including the Kane Sports Complex (soccer, lacrosse, track and field) and Nobody * Robison Field (softball).

In addition to new facilities, the decade was marked by remarkable athletic team and individual achievements. Under long-time coach May, the 1991 soccer team shared the Ivy League title with Dartmouth. In 1994, Cornell used a 2-0 win over No. 4 Hartford to achieve a national ranking of 14th and a number one in the ECAC tournament, where Cornell made it to the final for the first time. The team celebrated its sixth consecutive appearance at the ECAC tournament in 1995 and reached the final for the second year in a row.

The volleyball team won their first Ivy League tournament in 1991 and followed that victory with championships in 1992 and ’93, resulting in an automatic bid for the NCAA tournament, the first Ivy League volleyball team to compete in the NCAA postseason . During the decade, the 1991 field hockey program and the ice hockey team coached by former Harvard star Julie Sasner also won 1996 Ivy titles.

Cornell’s Olympic athletes during this period included handball player Keri Farley and rower Andrea Thies, both of whom competed in the 1996 Summer Olympics in Atlanta. Thies has been an assistant rowing trainer at Princeton since 1998.

Read the full version of this story on the Cornell Athletics website.

Who we are: Grace Driskill