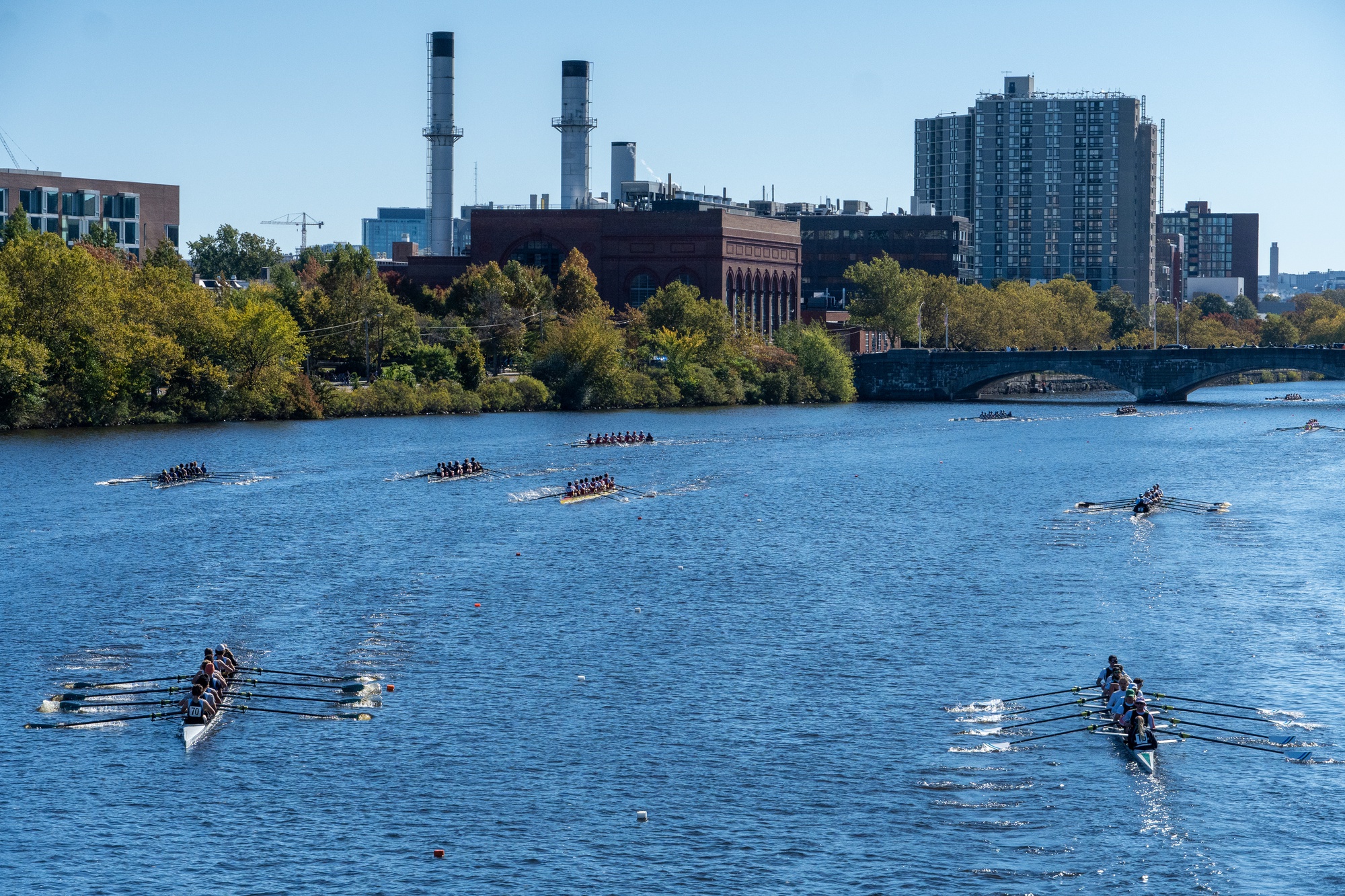 For the college crew teams who consider the Charles River their home, the fall season ended on November 13th with one last row on familiar waters.

The Foot of the Charles Regatta, hosted by the Harvard and Radcliffe teams, is the much smaller fall finale that follows the Global Head of the Charles in October.

There were four races in total: both men and women had a “four” and an “eight”, with each boat race having four and eight rowers, respectively. All four Harvard crew teams were well represented and had little outside competition.

HEAVY AND LIGHT FOR MEN

The only non-Harvard entrant in the men’s competition was Northeastern, which has only one heavyweight roster.

The first race of the day was the men’s four-man race, with all three teams racing four separate boats in A, B, C, and D in their respective programs. The “A-Boat” is the most competitive boat of any program, their “A-Team” of rowers. The other boats follow one after the other, the “B-boat” the next most powerful and so on.

In the men’s heavyweight division, Northeastern’s A-boat took first place, finishing the course in 12:35. The Huskies were followed by the four Harvard heavyweight boats, which ended in alphabetical order within less than 35 seconds between them.

In the eighth of the men, the Harvard heavyweights competed four boats, in places A to D. The Crimson lightweights drove three, A to C, and Northeastern only one A-boat on the heavyweight side.

“Overall, a great team-wide result that demonstrates good depth,” Harvard men’s heavyweight crew coach Charles Butt wrote in an email. “Losing at the top is tough, but it’s early in the year and the team always responds well to challenges.”

HEAVY AND LIGHT FOR WOMEN

The Radcliffe women had more competition over the weekend. Boston University, Boston College, Northeastern, and the University of Rhode Island all competed in the races. Among the visitors, Boston University was the only one to step on light boats in addition to its heavyweights.

Twenty-eight boats faced each other in the aft of the women. The Radcliffe Heavys contributed four boats that were A through D on the program, and the lights added two, A and B. Each Radcliffe team also took in a beginner boat with amateur rowers that they trained in that semester Hope to be integrated into the respective programs.

The light A was the first Harvard-affiliated boat to cross the finish line, finishing fourth in an impressive 13:32. The heavyweight A-boat was less than a second behind and finished fifth. Heavyweight B came ninth, C 10th and D 21st. Lightweight B came 12th.

The final race of the day was the women’s four-man race, which only had three boats. Boston University took first place, rowing the course in 15:58, next the Radcliffe lightweights in 16:25, and finally the Radcliffe heavyweight newbies in 18:27.

In their sophomore year, Ava Sack and Ryan Swastrom rowed in the Lightweight A back boat.

“The Foot of the Charles was a way of showing how we could compete in an open weight class, so we were really excited to see our pace there and how we worked on improvements over the season,” said Sack.

“We just focused this season on being positive and getting our feet back on the ground,” added Swastrom. “It was exciting to show how much improvement we have made and that we will be faster and faster in the next season.”

The Foot of the Charles marked the official end of the fall season for all four teams in the Harvard and Radcliffe teams. Towards the end of the semester, they continue to train and prepare for their spring season. At the end of the winter break, they all go on a training trip to Sarasota, Florida.