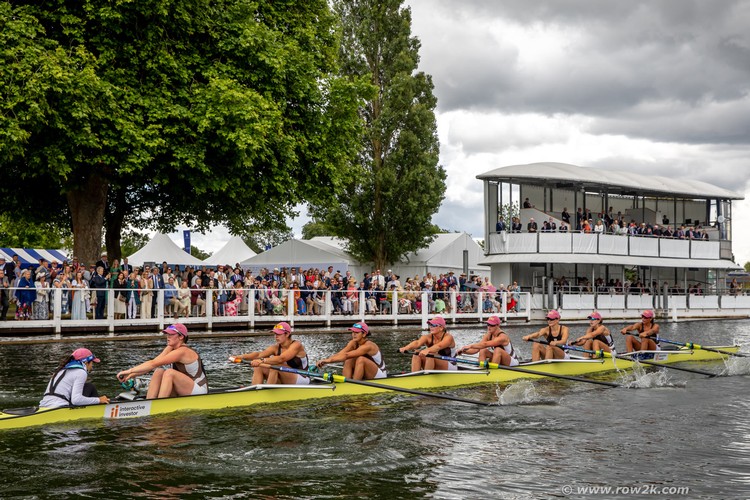 “Damp, but Brightening” was the most optimistic assessment of today’s weather in the official race comment sheets:

A few bright sunny moments, but light rain and, well, humidity moved on before a storm crescendo set in. It was pouring and pouring just before the tea break, putting starting riders in ponchos and adding some extra weight to crews on the water – including Washington’s 2V Eight, which is lining up for its next round of the Island Cup.

By the time the huskies were on the clock and moving away from the Dutch garrison, the sun was out again. Afterwards, Husky helmsman Grace Murdock said the key to this race was the trust this crew — who raced the NCAAs in almost the same lineup — has in each other:

“I think we went into that race just trusting that we would take every shot for each other. We phoned everyone and you could just feel everyone supporting each other.”

Brown also advanced on the island before tea-time and next meets Nereus of the Netherlands.


Getting through in singles and couples

Earlier in the day it was good to be in singles – Ben Davison and Kara Kohler both won in convincing fashion – and pairs, where all three college pairs won easily.

First it was Yale’s “Home Crew” duo of locals Lucy Edmunds and Katie King-Smith, who showed pedigree as U23 medalists and Henley winners respectively, that brought them to this elite couples event – and out of Yale 1V who will race the island — by winning the away game, Cal’s Lucine Ahyi & Fien Van Westreenen made them even better with a slightly faster time. The Cal race was close to 1/4 mile but her opponent wobbled and Cal slid to the edge and the faster time.

The reward for these two couples will be a quartet of Olympic gold medalists: Olympic doubles champions Grace Prendergast and Kerri Williams of New Zealand for Cal, and for Yale it’s the “AUSA” couple with double US gold medalist Meghan Musnicki and Aussie 4 champion Jessica Morrison.

The Washington pair – Shakira Mirfin and Madi Frampton – rowed down the course just as cleanly and they will face off against Mirfin and Frampton, who come from Washington’s varsity four of NCAAs, meaning UW is the closest of any US college here his NCAA roster: the 1V is in Remenham, the 2V is in Iceland and then this pair. Next, they face Jean Mitchell and Eleanor Price of Rowing Australia, who won bronze in the AUS Eight at the Poznan World Cup.

“Yeah, I think they were happy to come down the course side-by-side with someone like that for the first time at Henley and I think they’re the most iconic place in the world. I think you have to be kind to get through that moment where it’s like, oh my god, it’s Henley, it’s Henley, and then suddenly, eat, like I think like blackberries, they have to find their rhythm and settle into theirs Feel safe about three or 400 hits it’s so great. So yes, yes, yes, that’s good. ”

The day was a mixed bag for US collegiate and junior squares: both collegiate squares – Cal’s and Brown’s – went out, as did the Los Gatos silver-medal crew of the Youth Nationals.

“I think the Hereford team just handled the conditions better than we did,” said Los Gatos manager Channing Walker, “and that was unfortunate. It wasn’t our best but I think we were very aggressive.”

“Our season was similar: we were level, if not a little faster than them [Youth Champ] Newport Sea Base outfit in the first half of the race. Then they were just better trained, a bit stronger in the second half, so I think they just need to get fitter. They’re all coming back, they’re all juniors, so I’m confident they’ll be better next year.”

Summer isn’t quite over for the archery pair: Alberto Lasso and Jonas Thieme won the Junior Pair Trials last month and are now traveling to Rome for a training camp ahead of the U19 World Championships in Varese.

Lasso is looking forward to getting back to work: “A big part of racing at the World Juniors is going to be this block of training that we’re going to have before the World Juniors just to keep up the fitness. I think that’s really the most important part as we go into it.”

Thieme was looking forward to the move to Sweep: “I’m a big fan of the couple, especially this couple: it’s one of my favorite couples.”

“Both have an aspiration to row lightweight programs to the next level,” said Coach Walker, and I think the opportunity to compete against the best junior heavyweights in the world is something they’re excited about.”

The Dolphin Club fared better, making the most of their first race and advancing with a four-length win over Tideway Scullers.

“I was definitely very scared on the start line,” said stroker Dylan Good. “Every practice session I just imagined what it would be like to race, but I didn’t really prepare.

“Even when we pulled out I thought they were coming back – I’ve seen that too many times to shut it down a bit. So I just kept going until Tommy called the shift at the very end. It was definitely a really good race: it felt really good, I never really felt comfortable with our lead.”

The crew haven’t had many opportunities to race this year, and we asked two-seater Tommy Barbey what it’s like to finally be able to race side-by-side:

“I’m glad we had a run on track in the time trial but other than that it was pretty brutal to watch Tuesday’s race. I’m glad we got the send off because I think we needed it, we were pretty tired from jet lag and all. But I think watching the race and seeing how everyone gets the extra experience and especially watching the crew that we raced with: they were down and going back.”

“We wanted to create as much distance as possible and even when I tried to call it down at the end, I don’t think the boat wanted to go down.”

It should be noted that it is reportedly quite unusual for stewards crews coming out of qualifying to award “selected status” and a higher seed, but both the Dolphin Club and Winter Park Junior Women have had to since this rare incident really impressed with their speed twice and both are impressing during the actual race week.


How about this Winter Park Crew?

As for Winter Park in the Junior Women’s Eight, after an opening win over Tideway that one steward described as “definitive”, Park went on to beat the defending Headington School champions today and did so with record times at every marker – batting the previous mark by 16 seconds.

Needless to say, Winter Park turned some heads and the group that smacked them out of tents at the start was significantly larger today – and that was even before they came out quickly on Headington and then stubbornly clung to the lead, to win the race race on grit.

Stroke-Oar Paige Perrott acknowledged that Henley is much longer at home during the season than her crew races:

“Coming from a school team where we ride 1500s and that’s longer than 2km, it’s definitely a different mentality. Honestly what got me through the race personally was like the calls we had the helmsman make: they called me to get my sister who is also in a boat [at 3] and she called for my grandfather who was here all the time and donated money so we can even be here today. Coach Vertullo always says the play is made with the heart and I felt like we all had our own personal reasons for standing up for one another – and also for everyone at home watching and for the support we were giving gotten here. We gained so much support in this regatta.”


Notes from the course

One Hip-Hip for a Single: The tradition of hitting your opponent with three hip-hips is all well and good for big boats, but what if it’s just two scullers? After a race we saw one athlete just look at the other and say “hip, hip, eh” and wave. Seemed to do the trick.

The Hidden Boatyards: The yards are well hidden above the car park lawn and above Remenham Lane. Once you return there, the rows of supporters will remind you that Henley is, after all, just another regatta – and you’re sure to see plenty of what could be one of the original rowing hacks: sectioned eights ready to race down tiny British roads to be transported with a trailer.

The Breakfast Club: Crews practice here under many watchful eyes, but this year, right across the finish line, longtime – and legendary – Brentwood College coach Tony Carr is having breakfast with his family, scolding the passing Blades and bringing his son, current Brentwood coach Brian to look up bow numbers so he can keep track of who’s rowing best. So keep it sharp when you set off and when you turn for the next lap: the coach is taking notes.

Official Worlds Boats: Three of the US crews and six of the athletes officially accepted the spots on the 2022 World Championships team that they had earned in Poznan today. The Light Men’s Double, Light Women’s Single and Sculler Ben Davison will race intact here, while the other six will race in the Men’s Eight (Michale Grady and Justin Best), Women’s Eight (Claire Collins and Maddie Wanamaker) and Women’s Quad (Sophie Vitas) and the women’s single (Kara Kohler)

The GCU manager becomes famous for track and field titles

Wilkins ’22 is the first all-American rower in team history