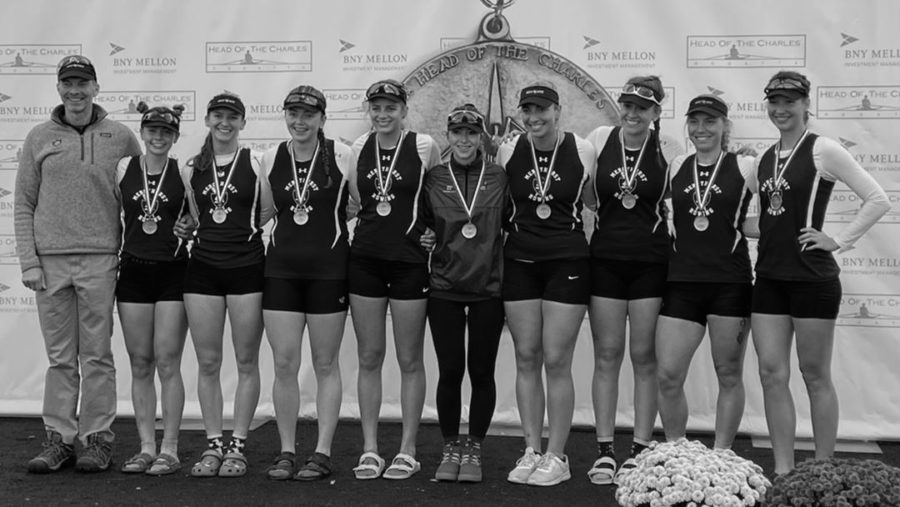 In the 50th year of the program, the Mercyhurst rowing teams again made program history for Mercyhurst. On October 25th, the men’s heavyweight, men’s lightweight, and women’s rowing teams traveled to Boston, MA to compete in the Head of Charles Regatta. With multiple medals from all three teams, it’s safe to say the Lakers seized their chances that day.

The Head of Charles is the largest regatta in the world. The Mercyhurst program sent three lineups to the Cambridge River including: a women’s eight, a men’s lightweight eight, and a men’s foursome.

What is a regatta? Before we get to the great achievements of these Lakers, background information on this rather unusual sport seems necessary. The autumn season is very different for this sport, because the races are six kilometers instead of the usual 2 km in spring. Head races typically have around 40 starters per category and each boat starts at a different time to make room on the track, so no one will know their results until everyone crosses the finish line.

The Head of Charles is no exception to these requirements, the only difference from this fall classic is its fame. High schools, colleges, and alumni come from all over the country to compete in Cambridge, MA. Starting with the men’s lightweight team, they were the first boat in the water and finished with a finish time of 15: 09.70. the 12th place. Next came the four men in heavyweight rowing and took the silver medal with a total time of 16: 53.320. It is also the first time the men’s heavyweight division has received a medal in program history.

“The boat I was in was great and it felt good to make a statement so early and especially to say goodbye to Kristian Trebilcock, a five-year-old senior, for his final fall season on the team,” said the new heavyweight rower Nate Harris.

“The regatta went really well for the entire crew. It was amazing to see how the hard work we all did so early in the school year paid off, especially with the Women 8 who made history with their win, ”said Harris. Then came the national runner-up in the Mercyhurst Division II of the Ladies Eights.

The women were extremely successful in reaping the fruits of their training work and took home the gold over 40 postal stationery with a time of 17: 16.704. This may seem like a regular win, but the Mercyhurst teams have never seen such great results. This is the first time since 2015 that the Mercyhurst women’s rowing team took home a medal and won silver in the process.

“I think this year is special for everyone because we returned to Charles after being canceled last year. We were hungry to race again, we love this track and had absolutely no expectations of our result, ”said the captain of the doctoral students, Anna Majek, who finished seven places in the field of eight women.

“Our trainer Adrian Spracklen said we just want to do a good row so we can cross the finish line and feel good and successful, and that’s exactly what we did,” said Majek. The emotions that both boats expressed show how great the Head of Charles event is for a rower.

“Winning the Head of the Charles was an incredible achievement, but above all it was a team effort. We all worked hard during the summer break to be even faster than last year, and I’m happy that it has paid off, ”says PhD student Ann-Kathrin Müller.

“Our racing plan was to be the fastest boat after the first mile and then just keep going,” said Müller. In one of the most famous regattas in the world, spectators from Boston and other universities gather to watch from the shore.

The people help create an energetic atmosphere that sets the Head of the Charles apart from other regattas. The race is also known as the “Cox Swains Parcours”, which means that the driver bears the greatest responsibility. The Charles River’s many sharp turns cause many collisions each year. Another challenge is maneuvering through the many bridges without cutting the buoy lines. Overtaking other boats along the way is also a dilemma as giving in to the faster team can put the rowers at great risk and even lead to a race stop.

“We landed after finishing one of our best races to date, but for some reason it was pretty quiet after crossing the finish line and doing our cool-offs. As we got off the boat after a quiet dock, Brady (a former Mercyhurst rower) came running to the dock with number one on both hands and said, “You won! You won! “At the time we were totally shocked, we didn’t believe it and we really thought he was kidding,” said Junior Elizabeth Northup.

The Lakers have defeated several schools from across the United States.

“We didn’t know what to do, but we all burst into tears of joy and jumped up and down and hugged everyone so excitedly. It was really so surreal to think that we just won Charles. The way we did it and did it so well, it was just an unforgettable series and had so many special moments and so much luck. “

“This is my fourth time at the Head of the Charles and every time it’s an unforgettable experience. For the first time in the history of the program, the women won gold in Women’s 8 College. We competed against teams from all over the country, distinguished by D1, D2 and D3 schools. The team is proud of what we have achieved and is looking forward to our spring racing season, ”said ladies helmsman Gabrielle Christello.

All of Mercyhurst’s rowing teams ended their 2021 fall season at the Cornell Autumn Classic held in Ithaca, NY on October 30th. The Lakers will be back in the water this spring for their championship season.