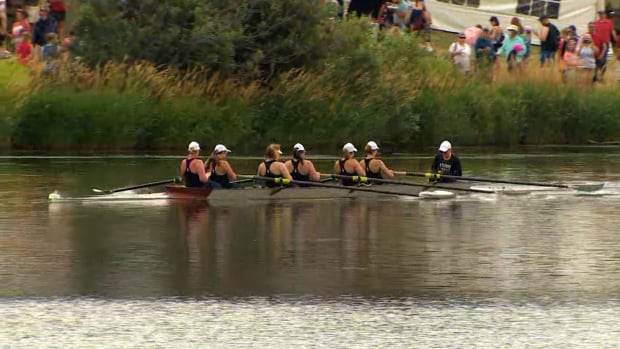 Despite being delayed by a day due to weather concerns, the shores of Lake Quidi Vidi were busy Thursday night for the championship races of the historic 204th Royal St John’s Regatta.

It was the first time since 2019 that providers and spectators were back at the lake.

The experienced Hyflodraulic Limited crew won the women’s championship race with an official time of 5:11:35.

“I loved the passion and the cheer because we didn’t have that last year with all the COVID stuff. I just sat there and soaked it all up.”

Meanwhile, four women’s teams made history on Thursday morning, rowing the 1.5-mile (2.45-kilometer) course as the first since 1816.

In previous years, long-distance was reserved for men, but that has changed this year.

“A lot of people on this crew have been pushing for this for a long time,” Verso rower Steph Davis said Thursday. “It’s really, really nice to see it finally coming to life, bearing fruit and having so much incredible support.”

Take a look at the sights and sounds of the 204th Royal St. John’s Regatta:

Sights and sounds of the Royal St. John’s Regatta

Catch a glimpse of the fun around Quidi Vidi Lake.

Men can now row on the short course, too, although no teams have entered this year.

The regatta will take place with a day delay

Peach announced the regatta would be held at a press conference just after 5:30am on Thursday, triggering the weather dependent St John’s bank holiday.

The regatta committee postponed the event on Wednesday because wind speeds of 20 km/h and gusts of up to 40 km/h were expected. The event will only take place if the committee determines that the weather conditions are suitable for rowing on Lake Quidi Vidi.

Environment Canada is forecast for drizzle Thursday morning and a mix of sun and clouds later in the day with winds of 12 mph. Temperatures are expected to reach 27 C with a humidex of 30.

“The decision this morning was much easier,” she said.

“He’s a great helmsman,” she said.

Elsa and Olivia said their aim for the regatta is to do their best – and have fun.

Chris Neary said the team could have some future champions.

The regatta welcomes dozens of vendors and thousands of spectators for the first time since 2019. Organizers say the crowd around the lake has ranged from 30,000 to 50,000 in recent years.

Peach said rowers are prepared for the higher temperatures but spectators should remember to bring water and seek shade during the hotter part of the day. She suggested attending the event earlier in the morning when the temperature is cooler.

St. John Ambulance will be located around the lake to assist in the event of an emergency.

The Anchormen Barbershop Chorus is one of the groups fundraising at the event. President Steve Martin said the regatta is the group’s premier annual fundraiser.

“We put a lot of energy into it, but we’re really enjoying it. It’s very rewarding,” he said.