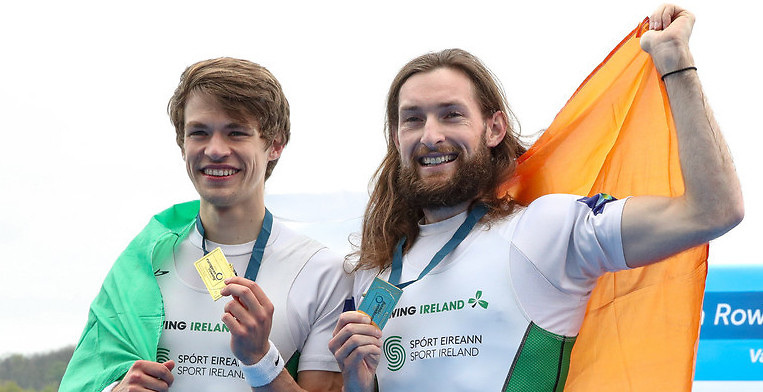 World Rowing announced that Ireland’s own lightweight double sculls with Paul O’Donovan and Fintan McCarthy are the World Men’s Crew of the Year. In a virtual event celebrating the best rowers and coaches in the world, three other premium World Rowing crews from France, Holland and the Kiwi Olympic Eight were nominated.

World Rowing commended the Rowing Ireland programme, led by HP Director Antonio Maurogiovanni, for the rise in rowing in recent years. Rowing Ireland’s Fintan McCarthy met online during the World Rowing Awards, having just finished training at Irish Rowing’s home at the Kinetica National Rowing Center outside Cork City. McCarthy reflected on the growing system of high-performance rowing that currently exists with an important avenue, and he reflected on the group of athletes who all train together at the Kinetica NRC to “make the boat go faster.” The other half of the Olympic duo, Paul O’Donovan, was unable to receive the awards due to his commitments at UCC, where he is studying medicine.

Michelle Carpenter, CEO of Rowing Ireland, said: “It is an absolute honor that World Rowing has presented our men’s lightweight doubles with this prestigious award. I would like to congratulate Paul and Fintan and the whole HP team on this impressive award Rowing Ireland board meeting this morning the awards were announced. It was such positive news to reflect on where we came from and where we are going as we embark on the Paris Cycle. It was also poignant on a day when the sport seems to be opening up, as one of the first events of our season was held at Cork Marina. This award and our continued Rowing Ireland strategy gives us great hope for the future across all our programmes. Without the support of Sport Ireland, Sport NI and OFI, along with our dedicated sponsors, have all contributed tremendously to Irish Rowing’s growth and success over the past few years. It takes a village to raise a child and now we have such incredible role models that anyone who is active in our sport can look up to him and know that through hard work and perseverance they can achieve the same.

Mason Greenwood, who has been arrested on suspicion of rape and assault, will not return to Manchester United training or games