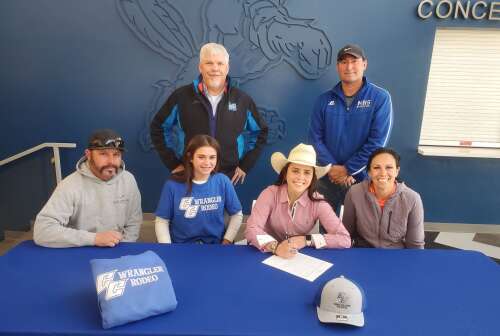 Rhiley Morgan-Montoya, the Mancos senior, has taken in many honors all over the rodeo circuit.

With her high school track career ending this spring, Morgan-Montoya accepted a full scholarship to attend Cisco College this fall and participate in the burgeoning Wrangler rodeo program.

“I felt really welcomed by Cisco College and Coach (Don) Eddleman,” Morgan-Montoya said of her decision to join the Wranglers program. “They are committed to ensuring that we are successful both academically and athletically — and in our careers beyond college.”

Cisco College is a community college located in a town of about 4,000 between Abilene and Fort Worth, putting Morgan-Montoya in the heart of rodeo country. The Wranglers compete in the Southwest region against community colleges from Texas and New Mexico, as well as Division I and II athletic programs like Texas Tech University and West Texas A&M.

Morgan-Montoya is pursuing a career in athletic training, which has been her primary interest since she was in high school.

Ever since Morgan-Montoya picked up the sport in elementary school, she has dedicated herself to the various disciplines of the sport, collecting countless buckles from her travels around the region, achieving her greatest successes in the goat tying and skipping competitions.

Six state titles—four in goat tying and two in breakaway roping—placed Morgan-Montoya on a who’s who list of Colorado rodeo athletes. They also got her the coveted opportunity to compete against the top athletes in the country at the National High School Finals Rodeo. “I’ve met so many great people competing against some of the best rodeo athletes in the nation,” said Morgan-Montoya, “and I’ve made so many great connections and new friends through these competitions.”

She credits much of her success to her support system, which has made countless sacrifices so that she can enjoy her success in the arena. “My parents have done so much for me,” Morgan-Montoya wrote, “along with my longtime coach, Ross, who taught me so many of the skills that have made me successful. Also, my sister (Quincy) pushed me to keep improving and we made each other better competitors.”

Her sponsors throughout her career also played a crucial role in funding some of her expenses along the way.

Meanwhile, she also had many equestrian teammates during her years in the saddle. Morgan-Montoya recalls her bond with Smoke, a man who helped her dominate the racetrack when she was in middle school. “He was one of my very first horses and although he was an older horse we had a lot of success together including winning my very first buckle.”

Morgan-Montoya has also developed into one of the top guards on the basketball court in recent years, helping lead the Mancos girls’ basketball program to back-to-back winning seasons in their junior and senior campaigns. Her on-court skills even earned her first-team honors in the All-San Juan Basin League and an honorable mention from all states.

Morgan-Montoya credits some of her rodeo improvement to lessons learned on the hardwood. “Playing a team sport was a learning experience for me, that I had to rely on others to be good,” Morgan-Montoya said of translating basketball into rodeo. “It’s also helped me be a stronger leader and a better all-around athlete, especially in terms of my pace.”

First up is Morgan-Montoya, a series of four spring competitions beginning with a rodeo in Loveland in late April and culminating in the state championship. Her goat tying skills have propelled her to the top of the standings heading into the spring season and one step closer to another bid for the national championships. The national finals will be held in Gillette, Wyoming during the week of July 17-23 as she seeks to complete her high school career before heading to college.