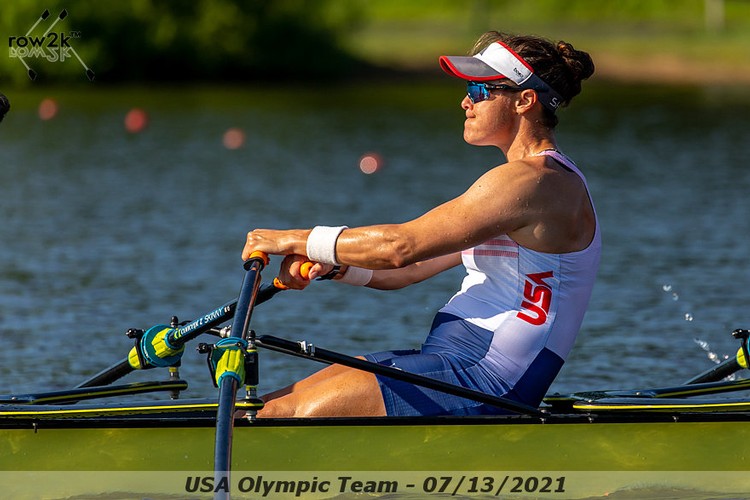 How did you prepare for this four-year period differently than in previous cycles?

My focus and preparation during the 2016 cycle was based so much on this idea of ​​counting each day and speeding up my learning curve. I had to fail quickly and fail forward, so learning was key and it felt like I was making great strides in such a short amount of time. This approach stemmed from the very real fact that I was playing catch-up since I started rowing so much later in life than my teammates and competitors.

This last Quadriennial was much more about building on all of those skills that I had finally learned, understanding the ways to improve, delving deeper into my shortcomings, and being kinder to myself. Things that I used to put a lot of unnecessary energy into worrying or anger about became less important when I began to understand the bigger picture of how to drive fast and how to enjoy being fast. And it was in this cycle that I realized that I am not a spring chicken. I had to put a lot more emphasis on recovery and my training to stay healthy and gain weight as an older athlete.

Did something completely unexpected happen or do you have unforgettable or unusual stories from this Olympiad?

The year before the 2020 Olympics was one of the most turbulent training years for me and, to be honest, of my life. Two important things happened that kept me from training at my highest level: 1) I was hospitalized for several days at the end of May 2020, battling an uncomfortable and stubborn infection in my left arm. I was out of the boat for several weeks to recover. In a way, I was very lucky that the Olympics were postponed. 2) Later in the year, at the end of November 2020, I had a bicycle accident that happened to also affect my left side. My poor left arm didn’t have a great 2020. I cut the ligaments in my shoulder that are basically holding my arm to my body. It was a lot of work getting to a place where I could keep up and it continues to be a lot of work maintaining the strength I need to move the oars through the water.

Any / most important advice for first time Olympians?

Enjoy it. Everyone says this, but really sit down and think about what that means. Most of all, I regret how disappointed I was at the end of our A-final in Rio. We were the last to arrive and I was devastated. I had so many friends and family in the stands and couldn’t even look at them as we rowed past on our way back to the docks. I let my own ego and shame dissuade me from enjoying this moment, even if the end result wasn’t what I wanted. The Olympics are so much bigger than you and your result. I told myself that no matter what happened in Tokyo, I would definitely look at the stands and take it in, smile and wave to my friends and family who had traveled so far to support me. While I get to Tokyo, I won’t get this chance due to the audience restrictions. So yes, for the early Olympians, the dream may not turn out exactly the way you want it to, but make sure you enjoy it for all it is. It really is a once in a lifetime experience.

How was your state of mind when you stood on the starting block for your first Olympic race? 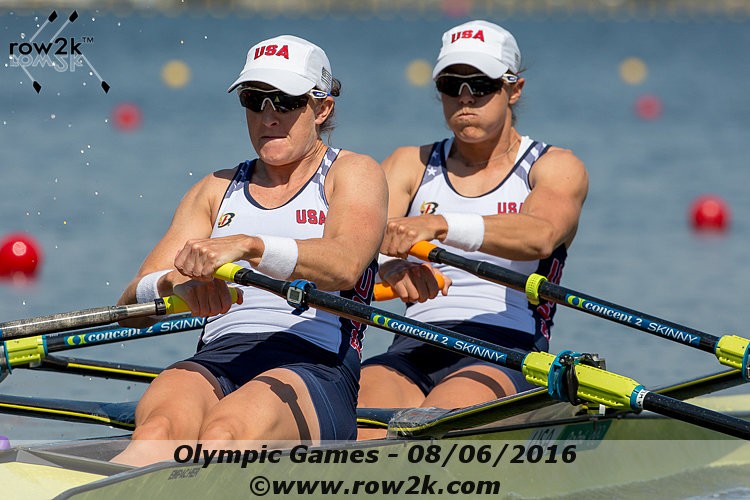 Get into the waves in Rio

I was nervous of course, but laser focused and excited to REALLY race in the Olympics. The weather was insane, it added to my fear and adrenaline, but you just have to put on your blinders and trust the work you’ve done and all the races that got you to that point. My first Olympic race was pretty terrible and weird (well, now after five years I can laugh about it). I’m not kidding, Ellen and I (in women’s doubles) rowed on three different lanes during our run. The weather in Rio had really turned up and the lake was basically an ocean. I had never seen or seen waves that big, moving in all directions. We caught so many excavators and were turned sideways and pushed onto other lanes due to the force of the wind and waves. I think they stopped the race shortly after our race. Not quite what you imagine your first Olympic race to be, but you just have to shake it off, learn from the experience, and move on. We would continue to fight our way through the hope race, ousting the Olympic gold favorites New Zealand in the semifinals and securing our place in the Olympic final.

What is different this time / what will you do differently at these Olympic Games?

So much is different! This game will probably be like no other, but very special in its own way. For starters I’m in the foursome against the doubles and that really excites me. I’ve never ridden the quad internationally so this is a whole new adventure. It’s faster, a whole new and different field of competition, and two more bodies to share this incredible experience with. Sitting in a big boat was a lot of fun and that will give this Olympics a whole new twist.

Regardless, I feel calmer when I go into these games. Call it age, wisdom, or both. Like all athletes in the later stages of their careers, I’ve seen almost everything that could be thrown at a rower. I also know that these will be my last games. It’s pretty deadly because I feel very focused, know exactly what to do, and I’ll be sure to make the most of every second because I won’t get another opportunity.

I am definitely older and wiser. I’ve learned that strength comes in different forms. I know that I am a stronger rower than ever before in my career; but my bench press is certainly nowhere near what it was in 2016.

Will the phrase “Olympics” ring differently next time?

I’m the kind of person who forgets that I’m an Olympian and now I’m a two-time Olympian! I’ve dedicated the last decade of my life to this trip, but I am not. My partner recently told me something about being a two-time Olympian and hearing it out loud was kind of shocking to me. I thought, “Oh yes, I am.” It rings differently this time, but for different reasons. In the 2016 cycle, the Olympic Games were that big goal I set myself in 2011/2012 and challenged my body and mind to do what felt like the impossible: go from beginner to Olympian. It’s an incredible achievement and something I’m so proud of. 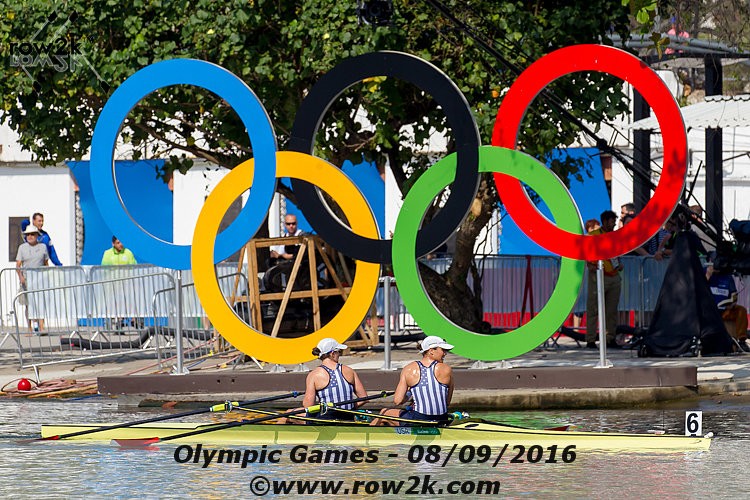 The rings in Rio

But during this process and the work I did out of the water, I also understood that while the Olympics are a wonderful celebration of the sport and bring the whole world together for a few weeks, the “Olympics” are not perfect. I love the joy and good that comes from the movement, but I think that having been a part of it and looking beyond the imagination, I see more clearly where “the Olympics” need to grow and change to do them justice become the movement it claims to drive.

As far as regattas are concerned, is it a better regatta or a different one or just a higher stake if you compare the Olympic Games with different races (Welten, Lucerne)?

There’s nothing quite like the Olympics, but I’ve found that the regatta park feels like a world championship. It’s still six lanes, 2,000 meters from start to finish. You will probably still be woken up by safety boats and media boats and mowed down by the GB or the German gentlemen 8 in the warm-up area. You still have to rig the sun and the heat, and you’re surrounded by the faces and crews you’ve seen in all regattas up to now. All of this creates an air of familiarity. Everything else outside of the regatta park at an Olympics certainly enhances the experience in a different way. For rowing, our world championships can often be more competitive due to the limited number of participants per event. But the world is watching at the Olympics. This is the event that is the pinnacle of our sport so there is definitely a sense of higher stakes standing on the starting line.

Personally: Meghan was a two-sport (softball and volleyball) athlete at the University of Virginia and a recipient of the prestigious Jefferson Scholarship. She learned rowing after college while living in Hartford, Connecticut and working for ESPN before choosing to train full-time at the US Rowing Training Center. After leaving ESPN in 2013, she co-founded Turazo, a software startup that helps companies recruit and hire people. She is also an Athlete Representative on the US Rowing Board of Directors, an Ambassador to the Women’s Sports Foundation, and a professional spokesperson for the BrightSight Group. 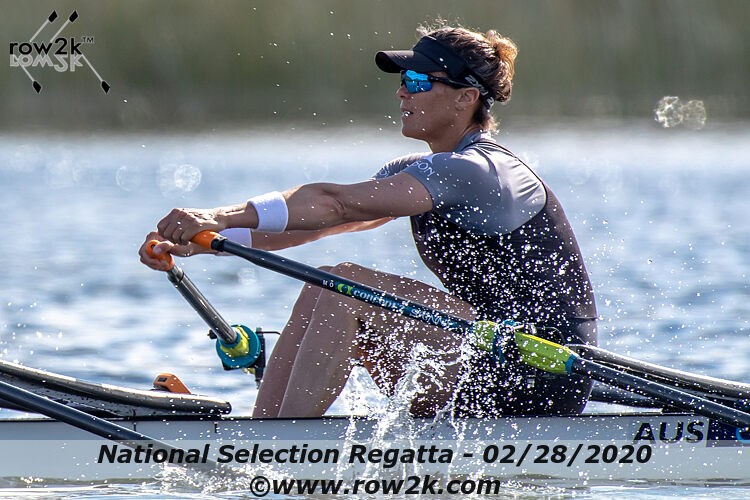 How to Watch the Olympics – NBC Boston