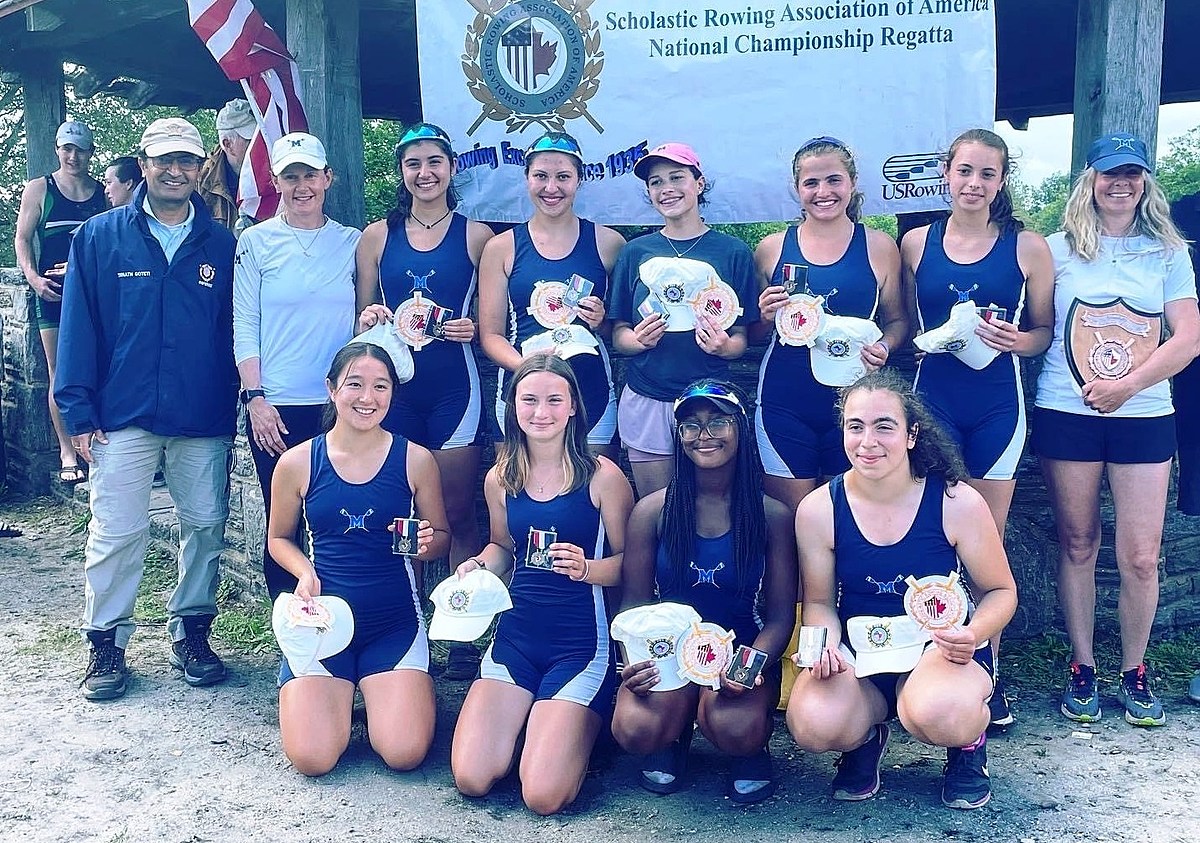 The Montclair High School rowing team‘s spring 2022 season is coming to a close and what a show it was.

After winning four state titles at the Garden State Scholastic Championship Regatta on April 30 and winning the men’s points trophy, the Mounties didn’t let up, winning medals at three championship regattas in a span of nine days while continuing their daily regimen training and fulfilling the school requirements.

After their 61st win in the state championship program, they are targeting the Stotesbury Cup Regatta in Philadelphia on May 20-21, the oldest and largest global high school regatta.

Competing against some of the nation’s fastest teams, eight of ten boats advanced to the finals, with the women’s JV8-plus and women’s freshman 8-plus taking home silvers in their respective categories.

The next day, May 22, the team returned to the Schuylkill River to compete in the Philadelphia City Championship Regatta, where they took home championships in two categories, the men’s 2V8-plus and the women’s freshman 8-plus. The medals didn’t stop there – the men’s 1V8-plus, women’s JV8-plus and men’s JV4-plus took silver, with the women’s rookie delivering 2x bronze.

Based on its strong performance in 2022, the eight-boat team qualified for the Scholastic Rowing Association of America (SRAA) National Championship on May 27-28 in Camden.

The Mounties rowed heavily, competing against 150 high school rowing teams and over 470 boats. Four of their eight boats reached the final. In the end, it was a day for the Mounties women as the women’s JV8-plus became SRAA national champions, beating Mt. St. Joseph’s by more than three seconds. The ladies V4-plus and ladies freshman 8-plus brought home bronze.

Montclair head coach Jeremy Michalitsianos said: “It was wonderful to have the support of our parents at races for the first time since 2019. The results this year have shown just how resilient the team has been and how successful both the men’s and women’s teams are a testament to their commitment to putting in the many hours of training it takes to succeed.

“The women’s JV8 becoming national school champions was the culmination of dedicated athletes and coaches striving to be the best. I am very proud of all our athletes and what we were able to achieve this year.”

While the regular season is over for the Mounties, the race continues for three of their 10 boats: the men’s 1V8-plus and 2V8-plus and the girls varsity 4-plus, who are competing in the US Rowing Association’s Youth National Championship regatta have qualified Sarasota, Fla., June 8-12.

This event is considered the premier junior rowing competition in the United States and is expected to attract approximately 2,000 athletes representing more than 200 rowing clubs and high school teams from across the country competing for titles in 18 boating categories. The championship is held at Nathan Benderson Park in Sarasota and has historically drawn more than 5,000 spectators.

The Montclair High School rowing team has a long history of winning national and international championships – a tremendous achievement for a public high school rowing team competing in a landscape of prestigious, privately funded preparatory schools and clubs.

Celebrating its 20th anniversary this year, the program is run by former Great Britain International rowing coach duo Michalitsianos and Lorna Rundle. Team members are consistently recruited each year from the country’s most prestigious universities.

To learn more about the Montclair High School rowing team or to enroll in one of the rowing programs, including learn to row summer camps, visit friendsofmontclairrowing.com.

From information provided by Friends of Montclair Rowing.