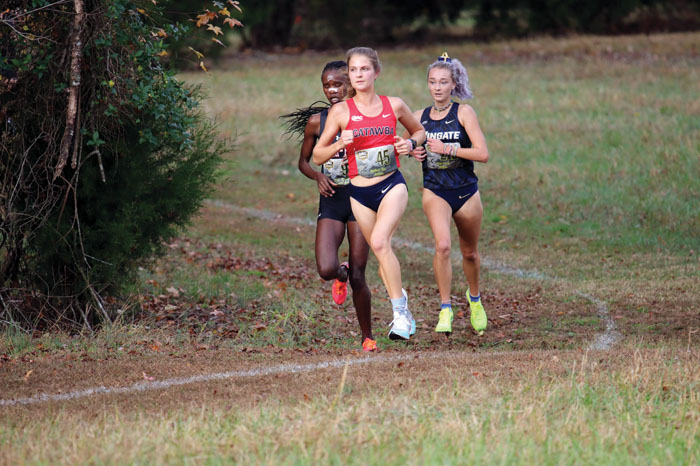 Catawba’s hot newcomer Madison Clay led the women’s field with a time of 21 minutes 58.7 seconds. It was the fastest time ever for the 6K in the Catawba program and Clay became the first conference winner since 1997, when Allison Dupree Adams took the crown.

Adams said, “It’s great to see the rise of athletics and cross country in Catawba over the last 5 to 10 years. Jason has done an excellent job, especially since the inclusion of the athletics program has allowed the school to bring more talented recruits into the program. Madison’s hard work paid off with an outstanding win last Saturday!”

Other highlights from this year’s women’s program include the highest conference finish since 1998, two runners making up the All Freshman team, and five All Conference selections. The top five finishers for Catawba included Clay, Mikayla Jones, Raina Andrews, Natalie Almond and Rachel Overby.

Clay of Morganton’s Patton High School was named both Freshman and SAC Conference Runner of the Year, a first for the Catawba program. At 18, Clay knows she has many expectations as she pursues her cross-country career. She said, “I still can’t believe my success, but I’m honored to represent Catawba as we seek to take our team to the next level. It can be stressful, but it’s nice to have goals. I just love running!” Coach Bryan says that Clay is always smiling, even when she’s passing other competitors on the track. Clay is majoring in exercise science and plans to become a Registered Dietitian.

The Catawba men’s team was led by third-place finisher Oussama Aiala with a season best of 25:30.06. He was followed by Mooresville native and Freshman of the Year Tanner Smith, Erick Ramierez, EJ Threatt and Brannon Burns.

The men’s second-place finish was the highest since 2002. Five all-conference selections and two freshman team selections were highlights of the conference meeting.

“I am I’m really excited about the group we have here right now.” Coach Bryan said. Both the men’s and women’s teams are called up this season and have accomplished some great things at the conference meeting. This has built up over the past few years and we’re having a great team season. Past team members and coaches laid the foundation for what is happening now and I am grateful for their hard work. Our goal is to be one of the better collegiate cross country/track programs in the area while achieving the national level annually. We have a chance to do something special at Regionals next week as we try to qualify both teams for the Nationals.”

Both the men’s and women’s teams will compete in the Regionals on Saturday, November 19 at Wingate University.

Next up for local racing is the ever-popular Butterball 5K Run/Walk at The Forum on Thanksgiving Day. It’s Salisbury’s biggest 5K and a wonderful way to burn off those calories before a big holiday meal. All proceeds go to Rowan for Child Abuse Prevention and participants will receive a commemorative t-shirt, refreshments and a chance to win prizes for the top three overall and top three in 13 age groups. Cash prizes total $500. Registration is available at The Forum, Runsignup.com and by post after printing a brochure on the SRR website. For more information on this and other upcoming events, visit www.salisburyrowanrunners.org.