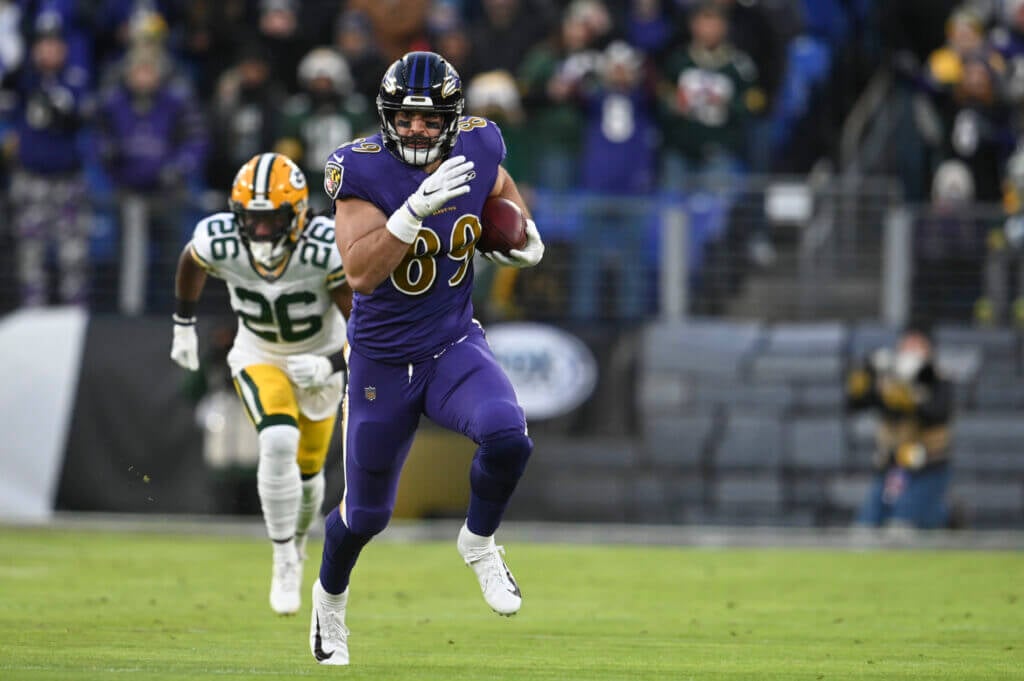 All in all, it’s been a pretty productive post-draft stretch for the Ravens.

They survived the rookie minicamp, organized team activities, and mandatory minicamp with no significant injuries and with positive reports of players returning from serious injuries. Their rookie class, led by safety Kyle Hamilton and center Tyler Linderbaum, looked as advertised. Lamar Jackson’s return to mandatory mini-camp last week gave a boost to the offensive and brought out the best in a question-shrouded reception group.

Mark Andrews, TE: Andrews’ standing with the Ravens probably couldn’t be higher after he had an All-Pro season last year and established himself as a top tight end. However, he still deserves a mention here simply for tackling the various off-season practices at a time when it would have been entirely understandable if he had stayed at home or cycled through practice. Andrews was one of the most active and hard working players on the field. Whenever the Ravens started fighting offensively during last week’s minicamp, Jackson found Andrews and the defense couldn’t do anything about it.

Athletic training/strength and conditioning bars: After last year’s injury-plagued campaign, so much attention is being paid to the Ravens’ collective health and their ability to avoid injury. So far, so good. The Ravens had a fair amount of absenteeism throughout the various offseason practices, but almost all of the health-related absentees came from guys who were still in rehab after suffering serious injuries during the 2021 season. If the most significant injury sustained during OTAs and mandatory minicamp was an ankle sprain, that’s good news. There’s still a long way to go, but after last year, when it seemed like every practice session was going down, every injury-free stretch should be celebrated by the Ravens.

Tyler Badie, RB: With JK Dobbins and Gus Edwards sidelined while they rehab their knee injuries, the sixth-round rookie continues to get plenty of chances and he’s making the most of them. He was particularly effective as a receiver outside the backfield. When he has chances to run the ball, he has shown a good shot and sight. Between Badie and veteran Mike Davis, who was also impressive, the Ravens have done a good job this offseason bringing quality depth to the backfield.

Jaylon Ferguson, OLB: Ferguson looks like a completely different player from his first three seasons. This is mainly because he lost a lot of weight and changed his body. That helped him play with a little more speed and aggression. Before Ferguson sprained his ankle last week, he showed a lot of improvement. He’s already a solid running defender. If he can get more juice out of the edge as a pass rusher, he’ll get plenty of snaps in 2022.

Daelin Hayes, OLB: Just like last year, Hayes was one of the most noticeable and effective players on the field during offseason practice. He looked explosive and put up a nice series of moves off the edge, which proved a constant challenge for the Ravens’ offensive tackles. Hayes couldn’t stay healthy last year, playing all four snaps of the regular season. If he can break out and become a threat this year, it would be a significant development for the Ravens.

Tony Jefferson, S. Jefferson’s career seemed almost over last year when he returned to Baltimore and injected some energy into an injury-depleted defense. Jefferson re-signed early in the offseason and the Ravens added a number of other quality defensemen. Jefferson is perceived as the “bubble guy” entering camp, but he was in fine form at last week’s minicamp with two interceptions. In a defense with a number of newcomers and youngsters, it shouldn’t be too hard to find a spot for Jefferson who brings leadership and personality.

Isaiah probably, TE: Probably one of the stories from last week’s minicamp became a series of one-handed catches and touchdowns in Thursday’s final practice session. He was also very noticeable during the OTAs and seemed to snap a few catches every practice. The fourth-round pick from Coastal Carolina already has a fan in Jackson. Much has been said and written about the team’s lack of depth at wide receivers, but Likely is versatile enough to help in that area.

James Proche, WR: Not only that, Proche seems to be making a few hard catches in every practice session. He did that last year too, and he came in sporadically on Sundays. It’s more the tenacity, consistency and work ethic that he brings to the field every day. Proche dropped a long pass on Day 2 of last week’s minicamp. Blaming himself, he caught just about everything that got his way in the last day and a half of training. He also seems to be fast becoming the leader of a young recording group.

Damarion Williams, CB: The rookie quarter-round corner makes a strong first impression. Defensive passing coordinator Chris Hewitt, a no-nonsense coach who isn’t easily impressed, was effusive last week when asked about the former Houston standout. Williams has been on the ball a lot during training and plays with energy and pride. He’s shown enough to suggest that as a rookie he could play a role on both defensive and special teams.

Ben Cleveland, G: Cleveland was expected to get a legitimate shot to win the starting left guard job this summer, and that’s how it could still play out. If last week’s minicamp was any indication, Cleveland has some catching up to do. The Ravens moved around their offensive linemen throughout offseason practice, but Cleveland didn’t get the same opportunities down the left flank as Tire Phillips and Ben Powers did. This is big training camp for the 2021 third-round pick, who needs to train better and avoid issues that take him off the field.

Daniel Fälele, OT: The next month will be crucial for Faalele to be in the best possible shape for the training camp. The 6-foot-8, 380-pound rookie battled the heat in both OTAs and minicamp. Spending a lot of time on one or two knees, he caught the attention of athletic training staff last week. Coach John Harbaugh defended the fourth-round pick, saying Faalele is a “good weight” and learning how to play at the NFL level. Nevertheless, it was clear in the last month that Faalele has a lot to do.

Malik Harrison, ILB: It’s not like Harrison did anything wrong, was out of shape, or noticeably struggled. None of that happened. He just hasn’t done much to stand out, and the Ravens need the third-year linebacker to make a meaningful move forward. The Ravens know what Harrison can do on special teams, but they’re thin at inside linebackers and Harrison is one play away from starting. There was talk of Harrison cross-training as an outside linebacker, but there was no evidence of this during drills open to the media. Harrison needs to make a name for himself on the inside.

Justice Hill, RB: Again, this has nothing to do with the form Hill has shown since the OTAs. He should be commended for recovering from an Achilles tendon injury and being on the field as early as possible. He also looks almost 100 percent. It all has to do with Badie and Davis’ performances over the past month and the reality that Hill, the 2019 fourth-round pick, needs to have a strong preseason to make the team.

Michael Pierce, DT: Let’s be clear: This isn’t a criticism of Pierce, who hasn’t appeared on OTAs and has been a mandatory mini-camp for what Harbaugh called a “personal matter.” Pierce deserves the benefit of the doubt and team officials appear confident the 29-year-old will have it all behind him by the time training camp begins, whatever the issue. Still, it was a shame for the team that they didn’t have their free-agent acquisition on the field throughout the offseason. Pierce has only played eight games in the past two years and has had weight issues in the past. His condition will be examined in the training camp.

Undrafted Rookie Free Agent Wide Receiver: That’s a little unfair because the Ravens’ six rookie free-agent pass catchers are still learning the offense. It’s not like Raleigh Webb (The Citadel), Devon Williams (Oregon), Makai Polk (Mississippi State), Slade Bolden (Alabama), Shemar Bridges (Fort Valley State) and Trevon Clark (Cal) have high expectations. However, it’s hard to overlook the opportunity they have. There is at least one opening for a rookie receiver, and none of them have consistently stood out. Williams probably made the most plays, but the six rookie free agents will need to flash more regularly to get into the 53-man mix.

Ar’Darius Washington, DB: Washington is returning from a serious foot injury that ended his rookie season last November, leaving him without an opportunity to start with his 53-man roster. It’s not his fault, but the Ravens are loaded in the defensive backfield and Washington won’t have much time to impress. His best role may be in the Nickels, and the Ravens are well-endowed there. You are even more secure.