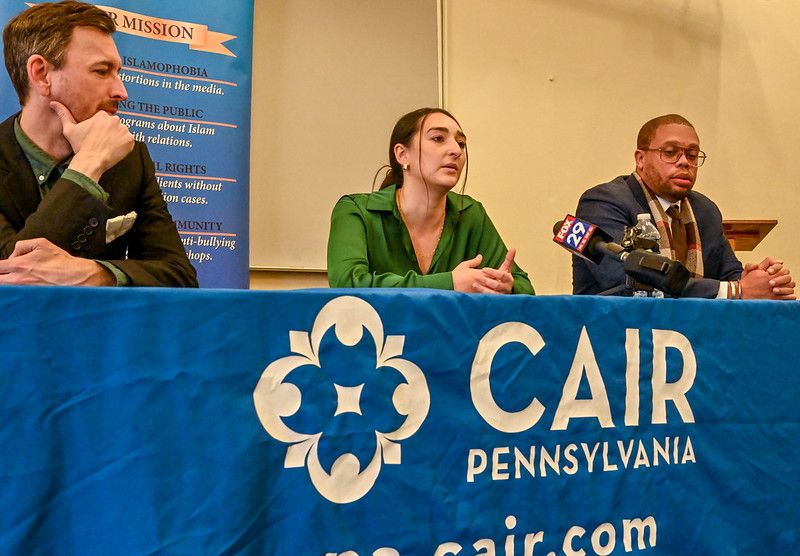 The complaint was filed on behalf of Abulhawa by the Philadelphia Chapter of the Council on American Islamic Relations (CAIR-Philadelphia), whose attorneys spoke at the press conference. CAIR found that AIS similarly situated employees who did not belong to Abulhawa’s protected class were not terminated because of their past or recent social media posts.

The prestigious private K-12 all-girls school hired Abulhawa as a full-time athletic coach after interviews were conducted by several school officials, including the school’s director of Justice, Inclusion and Belonging. She underwent multiple forms of screening, including criminal background checks, fingerprinting, and employment, education, and certification checks.

Abulhawa explained, “The [AIS] The offer required me to quit a job I loved at an excellent school and with wonderful student athletes. I made this sacrifice because of the incredible opportunity Agnes Irwin offered me.”

On November 1, 2021, the AIS athletic director informed Abulhawa that the school had received complaints from parents and faculty members about a dangerously misleading profile published about it by Canary Mission, a well-known Islamophobic, anti-Palestinian hate website. She was not given an opportunity to explain the nature of the widely discredited website and after a brief 10 minute meeting with Headmistress Sally Keidel was told her employment was terminated immediately solely due to the content of the hate page.

Abulhawa’s termination by AIS hurt her career. She noted, “The sports training community is small and word gets around. While I’ve had no trouble getting a job before, despite the current shortage of athletic trainers, I’m having trouble getting interviews with potential employers. The damage to my reputation, finances, career, and mental health was tremendous. I was forced to reconsider my career path, including going back to school to develop a different skill. I took freelance jobs without the security of a salary, health insurance, or other benefits.”

Jewish Voice for Peace condemns Canary Mission as a “malicious website that seeks to defame principled Palestinian human rights activists with targeted campaigns of misinformation, bigotry and slander. . . . Canary Mission targets students and teachers for criticizing Israel – not because they have expressed anti-Jewish prejudice.” (JVP statement, May 13, 2016)

On her page about Natalie Abulhawa, Canary Mission listed social media posts she made in 2016 when she was in Palestine and witnessed the Israeli occupation firsthand. Another malicious “evidence” used to discredit her was her membership of Students for Justice in Palestine at Temple University and the fact that her mother is respected Palestinian human rights activist and author Susan Abulhawa.

At the press conference, Natalie Abulhawa stressed: “The website that posted the misleading profile about me is not targeting genuine racists or anti-Semites – such as neo-Nazis, KKK members or white nationalists. Most of his targets are students or similarly vulnerable individuals with intent to destroy their careers and livelihoods.”

Since it first launched in 2015, Canary Mission has targeted over 2,000 people. However, it was Agnes Irwin who fired Abulhawa, not Canary Mission.

“It is unacceptable that Agnes Irwin treated me with such contempt and disrespect. Discrimination against Palestinian Americans and Muslim Americans in the workplace is a real problem. AIS didn’t think twice before leveling my life without even appearing to be due process. It only took one known hate site to profile me for them to wreck my career,” Abulhawa said.

“I am telling my story today so that Agnes Irwin, who purports to empower women, can be held accountable for how she humiliated, humiliated and hurt me. Institutions like this often do not hesitate to harm people like me because we are perceived as powerless. Instead of behaving ethically and fairly, they have bowed to the whims and xenophobia of the financiers.”

CAIR has launched a letter campaign on behalf of Natalie Abulhawa. The link to the letter being sent to Agnes Irwin is tinyurl.com/2s3t7ay2.

Gophers bet on dual against SMU in Dallas

Lightweight Crew opens the spring season 2022 on Saturday at home