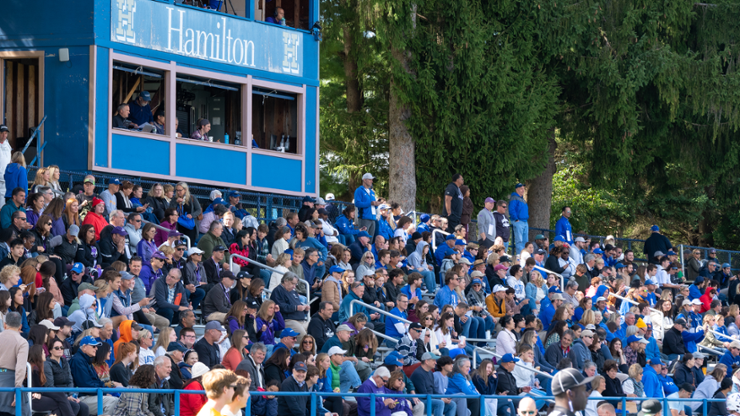 Nearly 1,700 Hamilton alumni, parents and friends were greeted on College Hill by an autumn chill and plenty of sunshine for Fallcoming/Family Weekend September 23-25.

Among highlights, Paul Reichert received the Alumni Council’s Jeff Little Volunteer of the Year Award in ’90 and Monk Rowe, Joe Williams director of Hamilton’s Jazz Archive, was honored with the Distinguished Service Award.

“As soon as you graduated, you began a new way of giving something back to your alma mater, always with the aim of productively involving alumni and networking with one another,” says Reichert’s justification. He has volunteered for Hamilton in a variety of capacities, from service on several Reunion Gift Committees, the Washington, DC, Regional Planning Committee and the Admission Office’s HART program. As regional president for the DC area, he hosted alumni and students who gathered in Washington for the 50th anniversary of the Hamilton program in 2019. Reichert’s diverse talents also include contributing illustrations to Hamilton alumni publications.

Rowe has collected more than 440 video interviews that together form a history of jazz during the big band era. He has traveled the US and beyond conducting interviews and sharing information about the archive at venues such as the International Association of Jazz Educators in Toronto, the International Society of Music Educators in Glasgow and in New Orleans at the Jazz Education Network. Saxophonist Rowe performs regionally and composes for a variety of ensembles. “In everything you do, you demonstrate a wonderful generosity,” he said. “Always humble and kind – despite your celebrity status – you are a real treasure to Hamilton, our community and beyond.”

Other weekend highlights were: