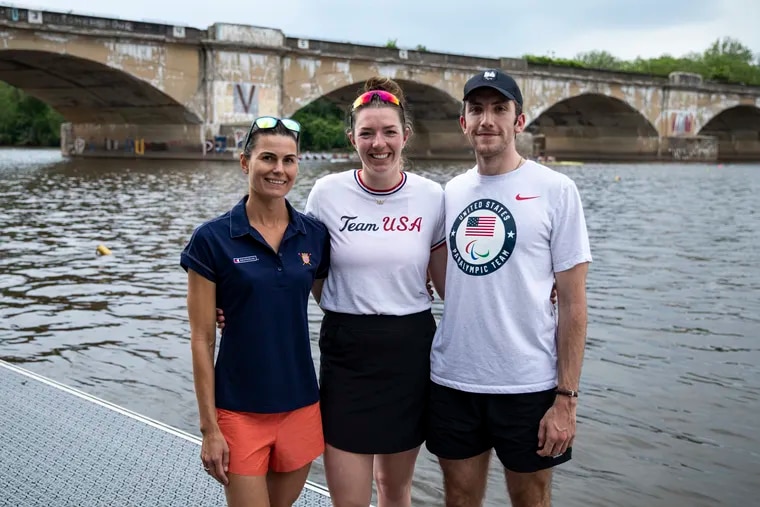 Nothing motivates a high school athlete more than connecting with and competing in front of world-class athletes. It offers a perspective of what they are striving for.

Three professional rowers who have competed as members of the US national team were honored Friday during the first day of the Stotesbury Cup regatta at the Schuylkill at the finish line dock next to the grandstands.

Brooke Mooney, Cara Stawicki and John Tanguay shared the dock for a photo op before heading to the event sponsor’s tent. There they offered personal stories and wise advice to many rowers from 186 participating schools while dodging the regular afternoon rain showers.

“I definitely feel nostalgic to be back,” said Tanguay, who rowed at Hopewell Valley Central High School in Pennington, NJ. “I haven’t competed in Stotes races, but in similar regattas. It’s definitely the excitement and smell of hot dogs and slushies that brings me back. That doesn’t exist at Olympic level.”

Tanguay won the silver medal at the Tokyo Paralympics last year in the PR3 Mixed Four with Coxswain event with a time of 7 minutes and 20.13 seconds. At the 2019 World Championships, he also won a silver medal in the same event.

Stawicki, a Lehigh graduate of Wall (NJ) High School, was the 2019 world championship gold medalist in the lightweight pairs event. Her advice to the next generation of rowers is to just believe in yourself and that perhaps the presence of athletes who have competed at the highest level can sow a seed of confidence.

All three athletes felt a small dose of glory during Friday’s regatta. Attendees, noticing their Team USA insignia, stopped them on the Kelly Drive sidewalk for a photo or just to introduce themselves.

“I realize how much it means to them,” said Mooney, who finished fourth in the women’s eights at last year’s Tokyo Olympics. She also trains at the Hun School of Princeton. “It’s cool to see all these younger athletes looking up to us. I’m just happy to be here so I can talk to them and answer questions about rowing. Let’s see if we can inspire them.”

Mooney, a Washington graduate student, also claims the fastest 1-mile time for a woman on an indoor rowing machine. Mooney’s 6:21.1 time on March 25, 2021 beat the previous record by 1.7 seconds.

The murky, dark stream of the Schuylkill was a docking point for each of these three world-class athletes at some point in their careers.

Thunderstorms ended the afternoon action on Friday. A midday storm that raged sporadically into early evening affected the schedule of the semifinals – with some canceled and others postponed.

Before the rowing began, a representative from Tri-State Toyota dealers presented a $30,000 donation to the Schuylkill Navy. Funds will be used to improve Philadelphia’s historic rowing facility. The Phillie Phanatic made a cameo appearance during the presentation.

“Toyota and its dealers are great partners for us,” said Bonnie Mueller, Commodore of the Schuylkill Navy. “It’s not easy to do what you do, it takes an army of resilience to weather adversities like a pandemic, drudgery or weather events. All of this is not possible alone. Even if you row alone, you cannot do it alone.”