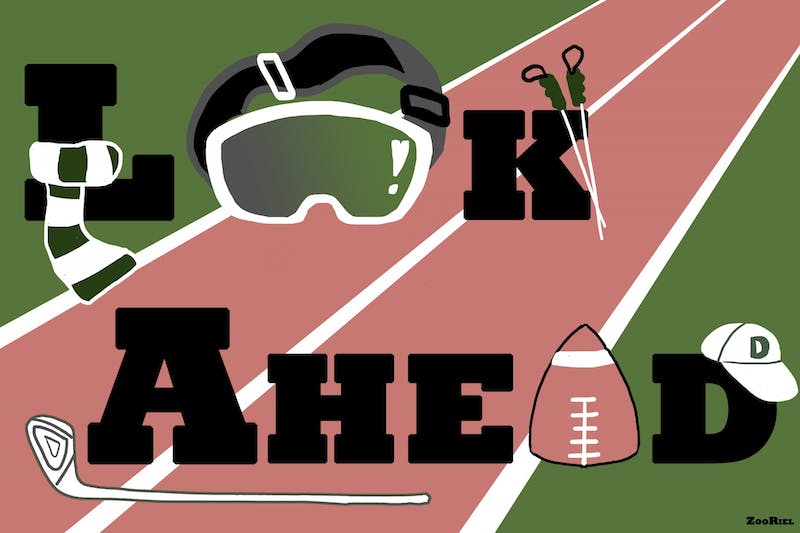 Equestrian will compete in the NCEA national tournament starting Thursday, track will host their first home meeting of the year on Friday and women’s rugby will play its first game since winning the national championship in November.

by Heath Monsma and Lizzy Strapp | 52 minutes ago

Big Green Baseball (12-13) begins its week with the first in program history at 3:00 p.m. against the University of Albany (15-12). Williams College and Bowdoin College. Leading that effort is Tyler Cox ’24, who leads the Ivy League with a .421 batting average. The live statistics of the game are posted by Dartmouth Sports.

The men’s and women’s track and field will compete on day one of the University of Massachusetts Amherst Multi Meet in Amherst, Mass. Both the women’s and men’s teams prevailed at Brown University’s Ocean State Invitational last Saturday. The second day of competition takes place on Thursday.

Equestrian (2-2) will travel to Ocala, Florida for the National Collegiate Equestrian Association national tournament. This is Dartmouth’s first time competing in the tournament, having been a member of the more inclusive Intercollegiate Horse Show Association in previous years. At this higher level of competition, Big Green will seek to make a name for itself nationally. Achieving that will require a strong showing from Claire Azar ’22, who was named to the Eastern College Athletic Conference All-Tournament flat and fences teams. . The tournament takes place over three days, with the competition ending on Saturday.

The men’s and women’s track will host the Dartmouth Outdoor Invite, starting at 11:00 am at Memorial Field. The University of Vermont and the University of New Hampshire visit Hanover to take on Big Green.

The women’s rowing team will compete on day one of the Big 10 Invite in Sarasota, Florida. The team last competed at the Connell Cup on April 2; Dartmouth’s highest finish was second boat in the varsity eight. Piloted by Grace Mclnerney ’25 and petted by Cece Plass ’25, the boat finished third in a time of 7:41.54. The second day of competition takes place on Saturday.

Baseball will host Princeton (4-21) for a double header, with the first game starting at 11:30 a.m. and the second at 3 p.m. Both games will be broadcast on ESPN+.

Women’s Lacrosse (3-7) meets Princeton University (7-2) at 12 p.m. in Princeton, NJ. The game will be streamed live on ESPN+. Last Saturday, Dartmouth dominated Columbia University (2-9) with a final score of 22-6. Katie Elders ’23 scored seven goals and had two assists for a total of nine points, tying the program record all-time in an Ivy League game.

Softball (12-20) plays in Philadelphia against the University of Pennsylvania (9-22) at 12:30 p.m. and 2:30 p.m. The games can be streamed on ESPN+. Softball also faced Brown on April 9, beating the Bears 3-1. Brooke Plonka ’22 threw a no-hitter and led the big green to her first win of the day. This was Plonka’s second no-hitter of her college career, and she was named Ivy League Pitcher of the Week.

Women’s tennis (7-9) will attempt to beat Penn (12-8) at 1 p.m. in Philadelphia. Elizabeth Fahrmeier ’25 and Katie Weber ’24, who hold No. 1 in doubles, won their match against Harvard University (12-7) on April 6, although the team suffered one loss overall. On April 2, Big Green lost 4-3 at home to Cornell University. Ashley Hess ’23 put in a particularly strong performance, winning with her partner Chidimma Okpara ’23 at No. 2 in doubles and also claiming a win at No. 2 in singles.

Men’s tennis (8-9) meets Penn (16-4) at 1:00 p.m. Dartmouth have had a slow 2-0 start to the Ivy League this season and are looking to win their first conference game of the year. The winner of the game takes the all-time lead, which currently stands at 9-9. Playing in fourth singles, Alex Knox-Jones’ 25 was a bright spot in the Big Green’s loss to Cornell on Saturday, winning in straight sets 6-4, 6-0.

After a stunning 23-6 loss to No. 5 Yale last week, men’s lacrosse (4-6) meets Princeton (8-2) at 3:00 p.m. The game will be broadcast on ESPN+. The Big Green is aiming for its first conference win since 2015 and its first win against the Tigers since 2013. Dartmouth will need a career performance from George Prince ’21, who leads the team with 35 points this season.

Women’s golf travels to Mitchellville, Md. this weekend to play day one of the Howard Invitational. Dartmouth have won the Prospect Bay Intercollegiate Tournament by six shots where they finished first out of fifteen teams. Katherine Sung ’24 led the pack by sharing first place – but lost the tiebreak and eventually ended up in second place – and will look to continue her dominance against Howard. The second day of competition continues on Sunday. This will serve as the final vote for the Big Green ahead of the Ivy League tournament in two weeks.

Men’s golf travels to the Yale Spring Invitational on Saturday. Last week, three golfers did particularly well on the big green at the Irish Creek Intercollegiate. Graduate Jason Liu, Eli Thrasher ’23 and Mark Turner ’22 all shot level to lead Dartmouth to 13th overall. On April 9, Turner shot in the first two rounds of the Princeton University Invitational to tie and lead his team to seventh place out of 15 teams.

Light Rowing will travel to Boston to compete against Harvard and the Massachusetts Institute of Technology in the Biglin Bowl. The Big Green is looking to improve on its season openers at the Diamond Challenge and Subin Bowl, where they were defeated by Princeton and Columbia, respectively. Princeton is currently No. 1 in the Northeast, while Harvard and MIT are both unranked, so this week’s matchup should be more favorable for No. 6 Dartmouth.

Two weeks ago, while the women’s rugby 7s team played the Crimson 7s tournament for the first time since 2019 – in which Dartmouth lost to Army 19-7 in the semifinals – the champions’ 15s team will travel to Fairfield, Connecticut, to play in to play a round robin against Sacred Heart University and Quinnipiac University. Those scrimmages will be an opportunity to experiment and stay in shape as Dartmouth edged the two teams 63-10 and 50-10 respectively in the regular season.

Women’s tennis continues its weekend outing, traveling to Princeton at 12pm (7-10) to take on the Tigers

Baseball plays its third game of the weekend at 12 p.m. at home against Princeton. The game will be broadcast on ESPN+.

In men’s tennis, 1pm sees Princeton (15-6) for Dartmouth’s second home game of the weekend. The game will be broadcast by Dartmouth Sports.

Softball plays its third game of the weekend at 12:30 p.m. against Penn. The game can be streamed on ESPN+.