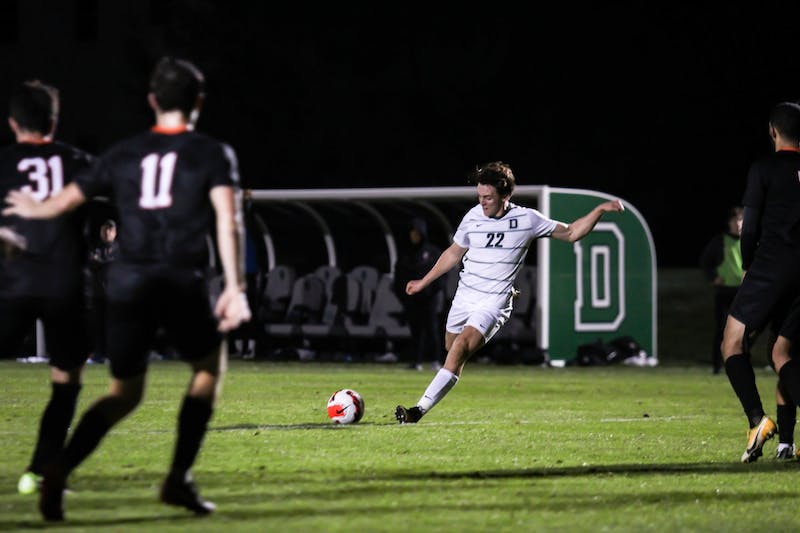 by Heath Monsma, Emma Dantas and Josh Paul | 18 minutes ago

The undefeated Big Green rugby team continued their triumphal march with a convincing 63-10 win over Sacred Heart University on Saturday. Sophie Ragg ’22 started her third attempt of the season after just 41 seconds in the game. During a dominant first half, Dartmouth jumped 29-3 in the lead with further attempts by Emily Henrich ’22, Sadie Schier ’25, Idia Ihensekhien ’21 and Sia Meni ’25 as well as two conversions by Kristin Bitter ’23.

The big green didn’t let up in the second half – two minutes later Nicole Ihensekhien ’24 tried her own with Ragg and Henrich, who each recorded their second of the game within 10 minutes and brought the result to 48-3. The Pioneers would reduce the score to 48-10 on their first and only attempt at the game, but that was all they could muster. A try by Lauren Ferridge ’23, a successful penalty from Henrich and a career-first attempt by Sophie Opler ’23 crowned the 63:10 victory. Dartmouth Rugby will be back in action next Saturday at home against Mount St. Mary’s University.

Dartmouth women’s tennis competed in the ITA Northeast Regional Championship this weekend in hopes of qualifying for the Super Regional Event at Princeton University later this month. On Friday, Nicole Conard ’22 and Chloe Yoo ’25 defeated Harvard University’s Rachel Arbitman and Holy Fischer 8-7 (5). Ashley Hess ’23 and Chidimma Okpara ’23 held their own in a close doubles match but ultimately lost 8-7 (4) to the United States Military Academy at Westpoints Cooper Jackson and Paige Herremans. In the single round of 64 on Saturday, Dartmouth won all individual games except one with wins from Okpara, Hess and Yoo and a loss from Conard. In the round of 32, Okpara beat her opponent from University of Massachusetts Amherst in a tie-breaker in the third set, while Hess and Yoo lost in straight sets to their opponents from Harvard. Dartmouth participated in the last day of Regionals on Sunday and will be back on the pitch in Princeton on October 15 for the ITA Northeast Region Super Regionals.

On Friday, Dartmouth opened its Ivy League game plan in Philadelphia against the University of Pennsylvania. The team was able to prevail against the Quakers for the fourth time in a row and came out with a 31-7 statement victory.

Dartmouth’s offense was steady and relentless all night, thanks to a dominant performance from the running game. The double threat of Zach Bair ’22 and Nick Howard ’23 combined for 192 yards on the ground and Howard delivered his second 100+ yard rushing game of the season with two touchdowns and a 13 yard pass to top it off. ’21 quarterback Derek Kyler held the Penn defense honest with a solid performance, completing 15 of 22 passes for 160 yards and a touchdown.

The other Dartmouth touchdown was a blocked punt, scoop and score from Robert Crockett in ’22 for the first touchdown of his career. Specialty teams were strong across the board, with a big 31-yard punt return from Jamal Cooney ’23.

Dartmouth fired in all three facets of the game as defense was a huge contributor to the team’s success, keeping their opponent only on one point for the second straight week. The big green was the light of the defensive from start to finish, so Penn could only pass midfield twice and force two interceptions. One of those interceptions was from Tanner Cross ’21, who led the defense with four tackles, but it was really a group performance of six with three or more tackles.

Next Saturday, Dartmouth host Yale over their home game weekend as they try to stay undefeated in front of their home crowd.

Men’s football is still looking for its first win of the season as it slipped twice this week. On Tuesday, the team traveled against the University of Hartford and fought hard in the 1-0 defeat but failed to get the ball past the goalkeeper who made six saves. After a long and tense deadlock, Hartford broke the tie in the 82nd minute with the goal that ended up winning the game.

After returning from Hartford, The Big Green will host Princeton in their first Ivy League game of the year on Saturday. Dartmouth were 2-0 down just before half-time in the second half when Ohad Yahalom ’22 sparked a comeback with a goal in the 66th minute. 16 minutes later, Tom Collins ’24 equalized to force extra time. Despite the momentum after the Tigers shot eight to three in the second half, a brief failure in the second extension gave Princeton the 3-2 lead they had to hold on to for the win. After this week, the Big Greens sit at 0-7 but hope to crack their loss to the University of Albany on Tuesday.

Dartmouth women’s soccer team hosted Princeton this week and fell 3-0 down, setting them to an even 4-4-1 record for the season.

The Tigers all scored their goals in the first half in the 17th, 30th and 32nd minutes. Goalkeeper Emily Hardy ’24 had a tough start as she was riddled with eight shots on goal. She was resilient, however, and scored five saves, including a particularly impressive dive on a header that appeared to be destined for the back of the net. On both defense and offense, Dartmouth turned things around in the second half, almost leveling the shots and creating multiple scoring opportunities, although the Big Green was ultimately unable to convert.

The Big Green looks to be ending its four-game losing streak when it travels to New Haven next Saturday to face Yale.

The Dartmouth field hockey team traveled to Providence this Saturday, where they lost 3-0 to a strong Brown team.

After the Bears’ first goal early in the second quarter, they remained relentlessly under pressure and scored in the third and fourth quarters as well. The big green was beaten 17-7 and couldn’t find answers for any of Brown’s three goalscorers. However, Dartmouth had some top performers struggling to stay in the game such as Cecelia Monnin ’22 who made three shots on goal and Isabella Santucci ’22 who made six saves.

The loss drops Dartmouth to 0-2 in the Ivy League and 4-6 overall. Next Saturday, the team will try to score their first Conference win at home against Princeton.

The women’s rowing team had a home scrimmage last Saturday against Yale University, with the 1v8 boat finishing the 3 miles at 4:33 PM while the Bulldogs finished at 3:32 PM a minute ahead of them.

The 1v for the women was controlled by Sam Sizelove ’23. Carter Nelson ’22 set the pace for the boat in front of her and behind her stern was Cece Plass ’25, Ellie Urdang ’22, Lucy Handy ’23, Allison Smith ’23, Jenna Martin ’24, Audrey Craighead ’24 and Daisy Dundas’ 25 Although the rowing season has not yet started, this scrimmage was an opportunity for the big green to see where it compares to a conference in preparation for spring.

The next women’s regatta will take place on October 24th and 25th at the Head of the Charles in Cambridge, Massachusetts.

The women’s volleyball team suffered two Conference defeats last weekend: 3-0 on the streets at Princeton University and 3-2 at home against the University of Pennsylvania.

The women tried a fight in the second set and came up with a score of 22-25. This was attributed to an 8-1 run, with key kills from Ellie Blain ’24, Nicole Liddle ’22, and Bomi Ogunlari ’24. Yet even with Emma Engstrom’s ’25’s 17 digs and Francesca Meldrum’s ’22 three defensive blocks, the women couldn’t keep up with Princeton in the third set to keep the match alive.

The volleyball team will try to recover from the losses this weekend, with street games against Brown University and Yale University on Friday and Saturday.