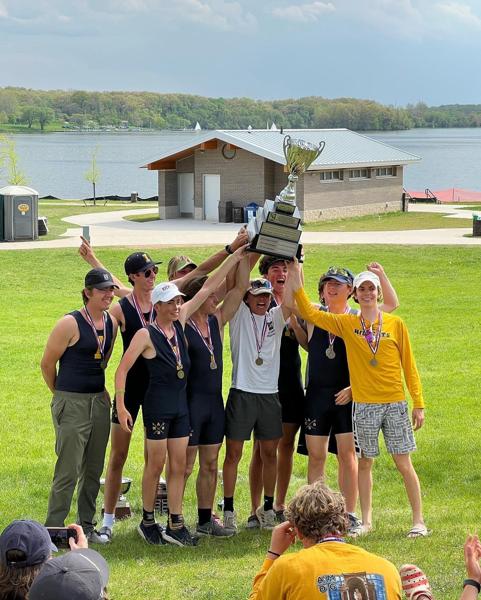 MILFORD, Mi — The Wildcat Navy had been working toward this past weekend since they took the water last fall, and for the upper class, particularly the elderly, it has been a multi-year pursuit.

The Midwest Championship is similar to the State Championships for those unfamiliar with the sport and they treat it that way. The preparation in the weeks before has one goal in mind: speed.

The Saint Ignatius crew team quietly has one of the most grueling training schedules in the school. During the season, training takes place for about three hours daily from Monday to Saturday, with morning lifts taking place every Tuesday and Thursday morning. The grind doesn’t stop when the waters of northeast Ohio freeze as the team head to the rowing pads at the Carfanga Family Magis Athletic Center for the winter months.

“It’s not easy training all year round,” says Senior Captain Ben Sommer. “The whole team is always motivated to come because we know we have to do it to compete with these other teams. We’re never the biggest crew on the water but with the amount of work we put in we always feel confident that we’re best prepared and I think this weekend was proof of that.”

The road to the Midwest Championship is long, and the work required to get there is even more.

With that in mind, the Wildcat Navy boarded the buses Friday noon. Team members had dedicated one, two, three, or four years of their high school careers to the program. Since the main objective was so close, it was a pinnacle of nerves and excitement. There wasn’t a single Wildcat rower or helmsman on those buses who wasn’t keen to get off the track in the days to come.

On Friday night, when the Cats arrived in Milford, they geared up their shells and headed to the waters of Lake Kent for some valuable training time. The weather was beautiful and everyone was looking forward to visiting the new regatta venue.

“I think Kent Lake turned out to be an excellent venue for the Midwest Championship. The course was fair, the buoy lines were straight and it was easy to see a lot of the racing,” says ’09 head rowing coach Connor Walters. “Having eight lanes as opposed to the usual six made for even more exciting racing. Any time you move to a new venue there is always a healthy degree of skepticism as to how it will work, but this location was excellent.”


After spending some time on the water, the team headed to the hotel for dinner, an evening meeting and relaxation before two days of rowing.

The real fun started with the 5:45am departure the next day for Lake Kent. It was a smooth bus ride to the water as the rowers began to settle in for the day ahead.

It was a perfect day for racing as the sun began its steady climb into the Michigan morning skies. The regatta started with the somewhat boring but necessary time trials. These would determine the heats for the semi-final races later that day.

Several boats from Saint Ignatius ran into the water during Saturday’s time trial. The two Novice Eight boats, Jr. 2x, Jr. Eight, Novice Four and Jr. Four all raced ahead of the semifinals. The Jr. Eight and the Novice Four each set the fastest time in their time trial race ahead of New Trier and Forest Hills Central.

After the morning tests and lunch in the “Carbo tent” it was time for the eagerly awaited semi-final races. In the semi-finals, eight boats often competed against each other in lanes equipped with buoys across the lake.

After the Freshman Eight race, a few hours before the next Saint Ignatius boat would compete on the water. Unfortunately, a thunderstorm came up at this time, which led to a delay in the weather in the afternoon.

The delay dragged on until about 5:00 p.m. when it became clear that the Varsity Eights races were unlikely to take place due to the remaining daylight, with a number of events still to take place before then. This was an apparent disappointment for the Wildcat rowers in the 3rd, 2nd and 1st Varsity Eights as many of them had to row in three races on Sunday.

“She [Varsity rowers] trained for the workload they put in on Sunday, but they also dealt with those issues and others,” explains Walter’s aggressive Sunday racing schedule.

After another team dinner and meeting, it was time for another early departure. When the buses pulled into the Kent Lake hilltop parking lot, the entire landscape was shrouded in thick fog. As the sun rose over the forest surrounding the lake, the fog quickly lifted, revealing the glassy water and cloudless sky.

Sunday at the Midwest Championship was wire-to-wire action from 8:00 a.m. to 2:30 p.m. and the Men of the Cuyahoga River had quite the day of racing.

The result of the Varsity Four race had lasted four years. At the 2019 Midwest Championship, Saint Ignatius and Orchard Lake St. Mary took first and second place, respectively, in the Novice Four event. The same crews operated the boats that competed in the 2022 races.

The first gold medal came in the men’s 2nd Varsity Four event, with the Wildcats finishing 6.9 seconds ahead of Forest Hills Central.

A new tradition began this year for every Midwest Champion boat. After a first place finish in the finals, the winner’s bowl rowed to a “Champion’s Dock” located in front of the main spectator area.

In previous years, after the last race, a grand ceremony was held where each team was awarded. With the new method, each team now had their moment of glory in front of the entire crowd, which was filled with coaches, friends, parents and teammates.

The Cats were far from satisfied as they clinched a string of three first places in their next five races. Those first places came in the Mens Jr. Eight, Men’s Novice Four, and the Men’s 3rd Varsity Eight. The Jr. Eight and Novice Four rode to victory in 5.7 and 9.7 seconds. The 3V, on the other hand, was a much closer race and from the spectators’ point of view one of the most exciting races of the weekend. New Trier attempted a late sprint to overtake the Saint Ignatius 3V, but the men in the boat managed to find an extra gear in the final 100 yards that allowed them to finish about half a boat length ahead of New Trier .

The Saint Ignatius 3rd Varsity B also rode in the final of the Men’s 3rd Varsity Eight and finished fourth, missing a medal.

The weekend’s main competitor was New Trier, the Midwestern powerhouse based out of Winnetka, Illinois.

It was no different in the last two races on Sunday. The Cats’ 2nd Varsity Eight and 1st Varsity Eight took second place in their finals. Both grenades crossed the line behind New Trier running in front. The 2V by 7.9 seconds and the 1V by just 2.1 seconds. These two boats gave every ounce of power and endurance in their races, but ultimately fell short of a strong New Trier team.

When the waters of Lake Kent finally stood still on Sunday night, the Wildcat Navy were crowned Midwest Champions and won the Men’s Sweep Points Trophy for the first time since 2018 with a total of 214 points. New Trier and Forest Hills Central followed the Cats in second and third place.

“It feels incredible to have the ‘real’ Midwest regatta taken away from us after two years of COVID felt good when we were able to win the title and trophy this year,” says Miklus. “Knowing that you provided a portion of one of the Hall of Fame flair banners is something I’ve wanted since freshman year.”

The team is basking in the glory of Sunday’s success, but it’s still not satisfied. The Wildcats will send multiple crews to the SRAA National Championship, which will be held May 26-28 in Camden, New Jersey.

Even with a Midwest Championship trophy on Walter’s desk on the second floor of the main building, things will be business as usual on the crooked waters of the Cuyahoga as the team will focus and try to get as much speed as possible in a limited time.

“These days leading up to the Nationals are some of the most focused drills of the year. We’re conditioned as we get, so the main agenda of these drills is to improve the more technical sides of rowing,” Sommer says.


The journey for this year’s seniors isn’t over yet, but Walters concedes they were nothing short of remarkable.

“As we continued this spring, I made it clear that this was a special senior class. Their freshman year was the last time things were ‘normal,’ and they’ve carried on for the last few years as if they were going to get their chance — and they did,” says Walters. “They hope that you have all your seniors in your top boats and all these boats that come in the top two in the midwest and move up to nationals I so admire these guys and appreciate everything they have given leadership for this program, camaraderie, encouragement, determination, friendship, ambition, success and joy.”