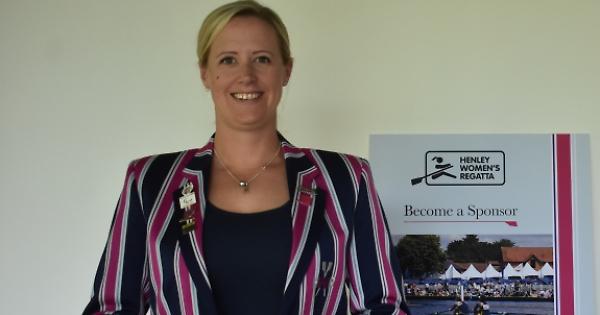 The women’s regatta aims to draw level with Royal

The ORGANIZERS of the Henley Women’s Regatta want it to be seen on the same level as the more famous Henley Royal.

The annual event takes place every June on the Royal Regatta Course when more than 1,500 teams from around the world race downriver side-by-side for three days.

The regatta has evolved since it began in 1988, but organizers want it to be comparable to the much older and larger Royal, which takes place two weeks later.

Regatta Chair Naomi Riches, Gold Medalist at the Paralympics, said: “We want to bring together as many local or locally based companies as possible to talk about the Henley Women’s Regatta.

“Compared to Henley Royal it’s often seen as ‘the minor regatta’ or ‘not the main regatta’ which frustrates me and there has to be a parallel.

“While we don’t want to be so corporate, we want the company’s involvement to allow us to do more for our athletes.”

She spoke at a special event for potential sponsors held at the River & Rowing Museum last Thursday.

Miriam Luke, an Olympic silver medalist who ran the regatta from 2013 to 2021, said: “Henley Women’s has been an incredible regatta and it has grown massively since 1988.

“We’ve worked very hard to make it an amazing competitive experience and to get more of the city’s people to come and see it for free.”

The regatta is currently funded by Henley City Council entry fee, sponsorship and grant income, which has enabled the purchase of more boat racks and more IT infrastructure to provide Wi-Fi throughout the site.

Ms Riches, who was born with a visual impairment, said rowing was the spark that ignited her desire to succeed.

During her high school year, her class teacher said at a parents’ evening: “Oh yes, that’s the blind girl from my class. Unfortunately we have to have girls like that in our school.”

Ms Riches said: “I didn’t want to be defined by what was holding me back.”

At the invitation of a friend, she was initially a spectator at the women’s regatta.

She said, “I remember sitting on the towpath having a picnic and getting muddy because it was drizzling, but I was like, ‘I love this, I want to be in this world, I want to do this’.”

She then spent a decade as part of the British para rowing team, becoming a six-time world champion and winning a bronze medal at the 2008 Beijing Paralympics and a gold medal at London 2012.

Ms Riches said the women’s regatta is an important part of the racing calendar. “For many athletes it’s the best they will ever achieve, the best they ever want to achieve, and for others it’s the step up to national trials or Henley Royal,” she said.

“We have such diverse crews, we have para and adaptive crews, we have really high level championship crews and we have development crews. We have something for everyone and it’s a real celebration of women in sport.

“I want it to be a place where people have to make a decision whether to do Henley Royal or come to Henley Women’s and see both in a similar light.

“No, it’s his own business. The ‘para’ in Paralympics stands for ‘parallel’.”

Jack Beaumont, Olympic gold medalist, former Leander Club captain and regatta ambassador, said: “What I have seen is how powerful it is for women in our sport. The parity in rowing, it gets there. I don’t think it’s quite where we want it to be, but it’s getting there.

“Any of you who will hopefully be generous enough to support this regatta will stand out. I hope you all support it very much.”

Tim and Sarah Lohmann, who met while rowing, already sponsor the regatta as a couple and through his company, Wentworth House Partnership, a development company in Esher.

Mr Lohmann said: “We don’t sponsor such things because we get something out of it, we do it because it’s a good cause and it’s a relatively low cost to the company.

“Rowing has a terrible image of being elitist and that is one thing the Henley Women’s Regatta is not. It is the opportunity to make women compete and strive.”

Ms. Lohmann, a teacher, said: “I got so much from rowing and from the sport. They really take pride in giving back.

“When you see how engaged, happy and enthusiastic the youngsters are and the fact that the regatta is open to juniors and has all kinds of athletes, for example future Paralympians, then I’m in for it.”

The number of participants in the regatta peaked in 2019 at 1,850 and organizers hope to reach that number this year.

Last year the event was able to broadcast the race live after spending £35,000 on drones, boats, licensed pilots and a broadcast crew.

• Miriam Luke will speak on the regatta and the rise of women’s rowing in a free public webinar on Tuesday at 6.30pm. The host is the Henley Rotary Club. To register, visit https://miriamluke.
eventbrite.co.uk