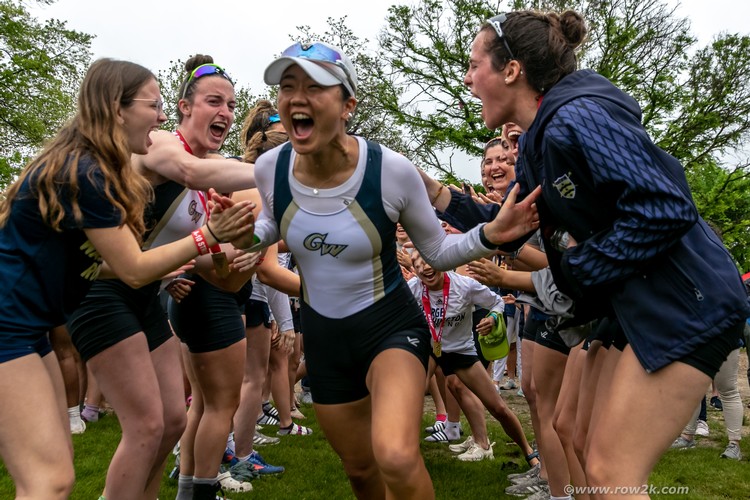 Trophies, Selfies & Ringers: The Week That Was in Rowing, 5/9-5/15 – Rowing Stories, Features & Interviews

Here’s your recap of what may in many ways be the biggest collegiate and youth rowing weekend of all spring – and the row2k gallery count for it all is 44 and counting.

(By the way, if you want to see the rest of GW’s rather epic tunnel antics showcased in the photo above, the sequence starts here.)

All that racing meant we saw a lot:


Six (and Seven) Across Racing…

We need more of this on Instagram folks, but until then, settle for our favorite sequences from the weekend:

Clever solution to “We can’t find Bobby” from these Sarasota folks.

Which begs the question: does it row2k summary the opposite of sports illustrated cover curse?


…and saw some history…

Yes, that’s about 100 years of coaching in that one tweet.


Selfies and taking pictures of selfies…

Yours (and note the mirror effect):

The selfie game has been going strong for newly minted champions from coast to coast everywhere.

Is that the case now?

Our champion page is better than yours ?? pic.twitter.com/HITb1LJLKU

For the record, only one championship venue had a race delay caused by, ahem, debris at the venue – this one.


Other hits of the weekend:


No regatta in Philly until…

Locals are starting to wonder when Kelly Drive is gonna fucking open again:


“Don’t believe everything you hear on TV”

And then came the “Oh wait…” but no one was listening – whoops.

(We tried to explain all the confusion in our Ivies report, but it was, well, confusing.)


The 4 without tax officials?

I love this translation on Insta… “Four without tax officials” ?? pic.twitter.com/55QyLWJIZo


Coach Bergman Back on BH Row

Coach was in town for his induction into the UPenn Hall of Fame.


wrestler of the week

Discover the Olympian in this lineup:

Or just really solid advance planning in case of a win?

This is definitely a regatta version of national team riders going into the finals with a flag in the boat for the medal dock pics.


It’s not a rumour

Before we get to the actual rumors, here’s one thing that’s absolutely true: the first person to show up at the line (except for this one program) at a regatta that we’re photographing wear that gets a free row2k shirt and hat so, um, get yours today?


Rumors & hearsay from the past week


The row2k top results of the week

Important results this week? Pretty much all, but if you’d rather skip the results page:


Check out these articles you may have missed over the past week: