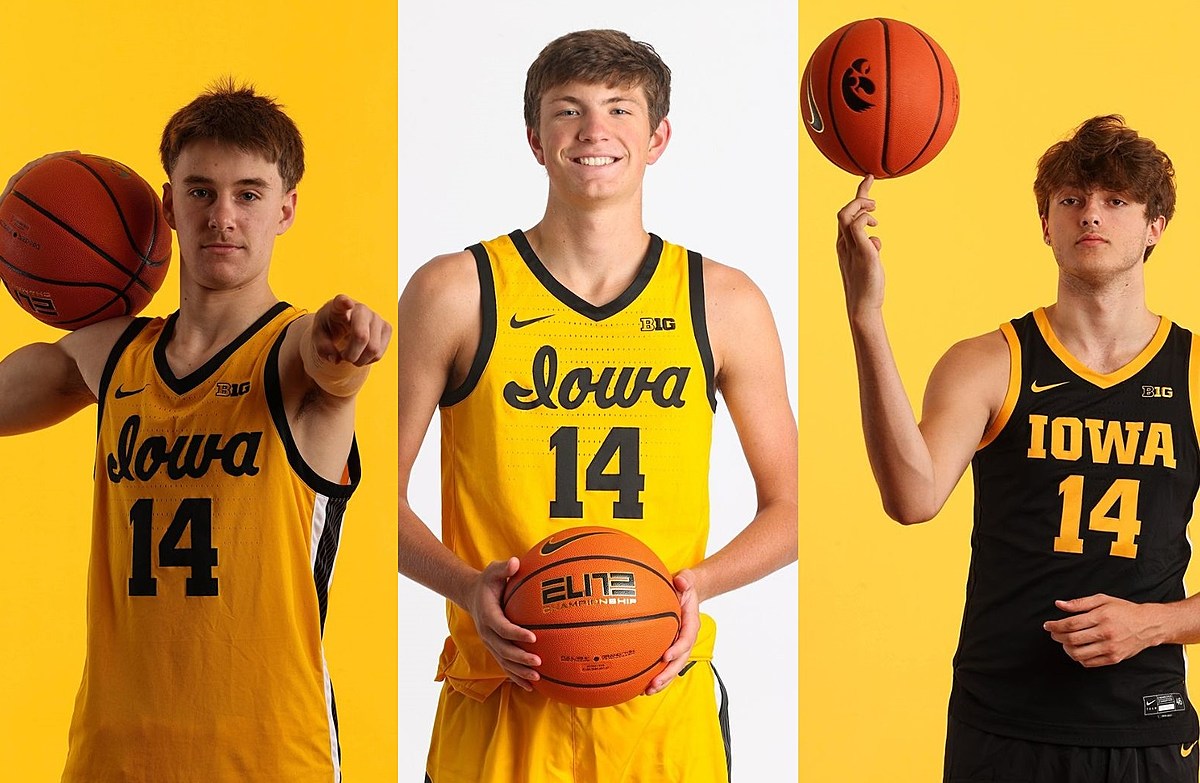 [UPDATED 11/17 12:20 PM] The Iowa men’s basketball program announced Wednesday night that they signed a fourth player for the 2023-24 recruiting class.

Last season, Dembele averaged 16 points and 12 rebounds per game while shooting 52 percent from the field and 36 percent from 3-point range.

Iowa coach Fran McCaffery said, “Ladji’s a great young man… We love his game. He has skills. he can shoot He can run, players we have in this class.”

[ORIGINAL STORY] The Iowa men’s basketball team signed three recruits for the 2023-24 recruiting class. All three are from within two hours of Iowa City, two play for the same high school, and the third has a brother starting on this year’s Hawkeye team.

Let’s start with the largest of the three. Owen Freeman (below) is 6-foot-11 and 225 pounds. He played at Bradley Bourbonnais High School in Bradley, Illinois, but transferred to Moline, Illinois, where one of his Moline High School teammates is also a Hawkeye signee.

Freeman averaged 18.5 points, 12 rebounds, 5 assists and 2 blocks per game with Bradley Bourbonnais last season, where he set a school record for field goal percentage (.682) in a season. He is the 20th power forward in the country by Rivals, according to the University of Iowa’s Sports Information Department.

Here’s what Iowa coach Fran McCaffery said of Freeman: “Owen’s someone we need to get in on right away and help each other out, and I know he can do that.”

The Hawkeyes are also adding a Warden to the team next year. He’s 6-1 and 160-pound Brock Harding (below), also from Moline High School.

Harding is a two-time first-team All-Stater at Moline. During his junior year, he was named Metro Player of the Year in the Quad Cities. He led Moline to 28 wins averaging 19.3 points, 5.6 assists, 3.5 rebounds and 2.8 steals per game.

McCaffery called Harding “a jack of all trades. He can shoot threes. He can shoot pull-ups. He’s fast and a phenomenal passer. He is everywhere and always makes the right decision.”

Iowa’s third signee is Pryce Sandfort (below) of Northwest High School in Waukee, who is 6 feet, 7 inches tall and weighs 190 pounds. His brother Payton, who is also 6-7, is a second starter on this year’s Iowa team.

Pryce Sandfort led the Class 4A in a variety of categories last season in Iowa: points, blocks, field goals made, 3-pointers made, free throws made and defensive rebounds. He was second in 4A in total rebounds. The first-team All-Stater averaged 26.2 points and 10.3 rebounds per game. Sandfort was also a 40.5 percent 3-point shooter and shot over 89 percent at the free throw line.

McCaffery described Sandfort as “a great shooter who can really see the ground.

Freeman, Harding and Sandfort will join the Hawkeye program this fall.

The Iowa men’s basketball 2022-23 (1-0) has its second game of the season Friday night. The Hawkeyes host North Carolina AT&T at 7:01 p.m. at Carver-Hawkeye Arena. The game is available on BTN+.

Next Wednesday, November 16th, Iowa travels to New Jersey for a game against Seton Hall at the Gavitt Tipoff Games. The tip will be at 6:30pm for a nationally televised competition on FS1.

30 Famous People You May Not Know Were College Athletes

Stacker dug deep to find 30 celebrities who used to be college athletes. There are musicians, politicians, actors, writers and reality TV stars. For some, an athletic career was a real, promising opportunity that ultimately faded due to injury or another calling. Others scraped themselves into a team and just played for fun and the love of the sport. Read on to find out if your favorite actor, singer or politician once wore a college jersey.

Sometimes pictures are the best way to honor the numbers we lost. If tragedy is a quick reminder that sport is far from the most important thing in life, we can still look back on an athlete’s moment of victory that felt larger than life, staying on the pitch grateful for their sacrifice and bringing joy to millions.