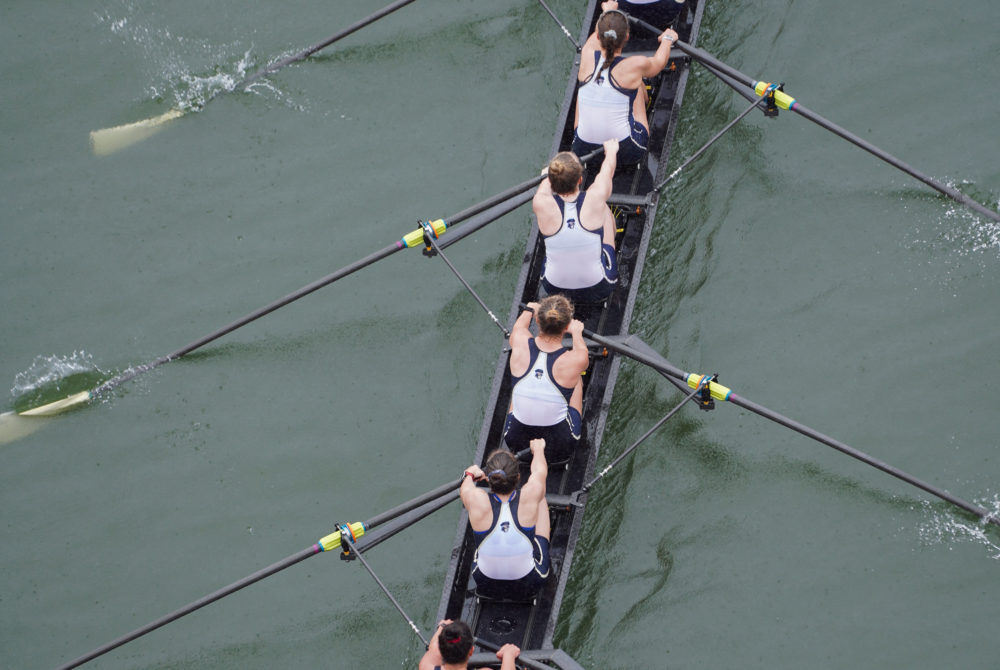 Students on the women’s novice rowing team formed this semester said the program allowed them to improve their rowing skills in an environment with other athletes at their level.

The women’s rowing formed a beginner team this fall, made up of students from many athletic backgrounds, to strengthen the ranks of the university program. Assistant coach Ashley Myles, who started directing the team in August, said she had taken over leadership of the team with the aim of putting novice rowers in the A-10 boats that would allow some athletes to get into the university Ascend status.

“The athletics department recognizes that most of the top programs in the country have a beginner roster in order to be competitive,” said Myles. “Not a lot of high school programs have rowing, and there is so much raw athletic talent, athletes going to college, who are out of their sport or who are burned out.”

Myles said she and the fellow coaches created a structure that allows the team to build relationships and work together to strengthen the team’s unity as they learn together.

“As far as training is concerned, we set a trajectory for them so that they are integrated into the university by non-rowers so far and complete full university workouts after two months of rowing,” said Myles. “So I’m really proud of you, you did a really great job.”

Freshman Caroline Crutsinger-Perry said she had rowed every four years of high school but wasn’t sure she wanted to stick with it in college. She said the beginner program provided a manageable way to continue the sport that she could enjoy.

Crutsinger-Perry said she also appreciates the transparency of the coaching staff as the team tries to overcome the learning curve and maintain a positive attitude. She said the staff had expressed a willingness to help them adjust to the overwhelming feelings of the new sport that could be overwhelming.

Freshman Maya Rezende Tsao said she became interested in the team for the first time because she saw it as a way to get more involved with campus culture, even though she had never rowed before. She said she used to be a gymnast and didn’t get much satisfaction from the sport because once she mastered a skill she no longer felt rewarded for advancing.

“When rowing, after every single workout, after every single row, you can feel the satisfaction that I’ve done that,” said Tsao. “And then when you’re on the boat and it’s moving you feel like you’re almost floating, and I don’t know, it’s pretty amazing.”

Tsao said she wants to improve both her speed and strength as a rower, but also tries to keep the sportsmanship on the team.

Crutsinger-Perry said it was “crazy” how quickly the team formed a community around each other on and off the water.

“When you have these relationships with your teammates, this bond and this connection, then I’ve been able to move really faster on the water because you’re not doing it for yourself but for others,” said Crutsinger-Perry.

After months of training, the team finally made its debut at the Head of Occoquan, finishing fifth and 13th in the 8+ while the 4+ boat finished sixth. Myles said she was impressed with the way the team behaved in an unfamiliar setting.

“At no point in the day did I think that they didn’t know what they were doing or that my nerves were starting to sink,” Myles said. “They handled it like a team, which I love to see.”

Tsao said it was a “surreal” experience to be on the water because it was completely absorbed by what was happening in the boat.

After the fall season is over, the Colonials will use the remainder of the fall to prepare for spring and improve on their second place, which best fits a program, in last year’s A-10 championship.

This article appeared in the November 15, 2021 issue of Hatchet.